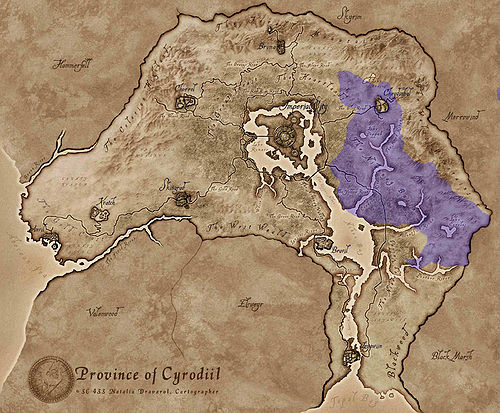 In Oblivion, the Nibenay Basin is a region in eastern Cyrodiil. The northern part of the region encompasses the city of Cheydinhal.

To the east, it shares a border with the Valus Mountains region. To the west, the region is bounded almost entirely by the Heartlands except for a small area in the north that lies next to the Great Forest. The area stretches south as far as the Panther River. The eastern portion of its southern edge abuts Black Marsh, while the western portion meets the Nibenay Valley and the southern portion borders Blackwood.

The region is surprisingly sparsely-vegetated. The south holds abundant Summer Bolete mushrooms and Foxgloves but only Lavender, Monkshood and Bergamot grow much elsewhere. There is also a sprinkling of other plants including Lady's Smock, Ginseng, Flax, Columbine, Alkanet, Motherwort, Peony and Primroses plus a few Nirnroot growing along the banks of the region's many rivers.

A list of places that can be found within the Nibenay Basin region.

A list of all quests involving the Nibenay Basin region.