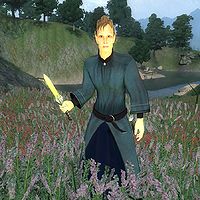 A Conjurer at Sardavar Leed

Conjurers are aggressive, spell-casting NPCs specializing in the school of Conjuration. They are always hostile to the player and will attack you on sight. They are not affiliated with the Mages Guild: they will be hostile even if you are a guild member, and can be killed without guild repercussions. Conjurers can be found in various forts, caves, and ayleid ruins, as summarized at Conjurer Dungeons.

All Conjurers, including Conjurer Adepts, are Conjurers by class and are members of the Conjurer faction. Their faction membership ensures that they are allied with the Daedra and other creatures that typically inhabit conjurer dungeons.

Conjurer Adepts are the conjurer bosses. Ten dungeons contain a single Conjurer Adept, typically as the last enemy that you will encounter. One additional dungeon, Fort Rayles, contains two.

There are also two specialized Conjurers who are added by official plug-ins:

Being spellcasters, Conjurers have a special "Conjurer Birthsign" which provides them with +50 Magicka. Depending on their race, they can therefore have +100 or +150 maximum Magicka. As with Necromancers, Silence spells or a silence-enchanted weapon can be useful to prevent them from casting spells at you.

Each conjurer will be able to cast 7 randomly selected spells: 1 each from the schools of Mysticism, Alteration, Restoration and Destruction and 3 from the school of Conjuration. In each case the effect is randomly determined from the following list while the strength of the spell is randomly based on the conjurer's skill level (except for Conjurer Adepts, for whom the strength of the spell is always the best possible for the conjurer's skill level). The possible effects for each school are: