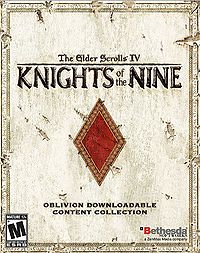 Knights of the Nine box art

A fallen King has been unchained from the darkness of Oblivion to seek vengeance upon the Gods who banished him. Only a champion pure of heart can vanquish the evil that has been released upon the land. You must heed the call, reclaim the lost relics of the Divine Crusader, and return the Nine to glory. New dungeons, characters, quests, and mysteries await. —Official Summary

One new faction is introduced and an existing faction is expanded with this add-on:

Nine Divines — The cult who worship the Nine Divines, largely consisting of people who work at the chapels across Cyrodiil.

Knights of the Nine — An order devoted to recovering the relics of the Divine Crusader, Pelinal Whitestrake.