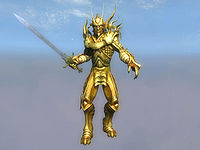 Umaril the Unfeathered in the spiritual plane

Umaril the Unfeathered is an Ayleid sorcerer-king who once ruled Tamriel and enslaved the human population. Umaril is a "half-Elf", born of an Ayleid mother and a divine father. His alliance with Meridia granted him immortality: upon death, his spiritual form would live on and inevitably return. Thus, Umaril would "never know death". Umaril is similar to Meridia's Daedric servants, the Aurorans, though much larger. He favored "ruin-from-afar", preferring to send minions to attack and weaken his foes before he would risk direct combat.

Umaril was defeated by Pelinal Whitestrake at the start of the First Era during the human uprising against the Ayleids, their "Slavemasters", and the fall of the White-Gold Tower. While Umaril escaped death, he was cast adrift in the "waters of Oblivion", and many thousands of years passed before he could return to Mundus. His return at the end of the Third Era is to seek vengeance upon the Divines who had brought about his fall. Aurorans under his command desecrated the chapel of Dibella in Anvil, and later the chapel of Mara in Bravil.

In order to defeat Umaril, he must be conquered in both the physical and spiritual planes. The eight Crusader's Relics originally used by Pelinal can help to destroy Umaril's physical form, but in order to reach the spiritual plane, a ninth item is needed, namely The Blessing of Talos, bestowed by Talos (who was not yet one of the Nine Divines when Pelinal fought Umaril). This blessing allows the Divine Crusader to follow Umaril into the spiritual plane, where a second battle must be fought to truly defeat Umaril.

The game officially considers Umaril to be a leveled daedric creature, rather than an NPC. One implication is that his soul can be trapped using a Grand Soul Gem rather than a Black Soul Gem. With one hand, he carries a leveled elven claymore, Umaril's Sword, with Shock Damage and Damage Fatigue enchantments. He can cast the leveled spell Mortal Light, which does up to 42 points Damage Magicka and 42 points Shock Damage. Umaril is immune to shock damage and immune to Wabbajack. He has 33% Resist Magic, 33% Resist Fire, and 33% Spell Absorption (accompanied by Stunted Magicka).

However, Umaril is vulnerable to the Crusader's Relics. When fighting a character wearing the full six-piece set of crusader's armor he is weakened by the Holy Aura, reducing his Agility, Luck, and Strength attributes by 60 points each and his Blade skill by 50 points. In the physical plane, Umaril is additionally subject to Crusader's Bane, an 83% Weakness to Fire effect, when hit by either the Mace or Sword of the Crusader. (With his 33% Resist Fire, the real overall Weakness to Fire is only 50%)

Umaril versus the Divine Crusader

The Prophet states during Pilgrimage:

He is the enemy of all who walk free on Tamriel today. A survivor of the ancient race of Ayleid slavemasters who once ruled Cyrodiil.
He was struck down by Pelinal, but by his art Umaril had bound himself to the realm of his mistress, the Daedra Lord Meridia.
So he was not slain, but simply cast adrift upon the waters of Oblivion.
Now he has returned to seek vengeance upon the gods who helped bring about his downfall so many ages ago.

During The Blessing of Talos, the Prophet adds:

You must first kill his living body. While beyond the power of most mortals, this is only the lesser of your two tasks.
His Daedric nature allows his spirit to escape into Oblivion after death. This is what Pelinal learned upon defeating Umaril the first time.
But you can do what Pelinal could not. The Blessing of Talos will allow you to follow Umaril's spirit when it leaves his body.

When Umaril joined with the Daedra, his spirit expanded beyond this realm. His physical form can travel between realms, but his spirit is bound.
When his body is destroyed, his spirit travels back to Oblivion and is reformed in the fires of creation.
With the armor of the gods and the Blessing of Talos, you will be able to follow him where Pelinal could not and destroy his very spirit.
Once his spirit is destroyed, he will be completely obliterated -- erased from all realms of existence.

Pelinal's description of events is:

I thought I'd won. But I should have known. The Slavemasters are a cunning breed. Umaril found a way to cheat death, as I could not.

Umaril's dialogue at various points is:

By my power, the mortal gods shall be cast down!

I do not fear your [mortal] gods!