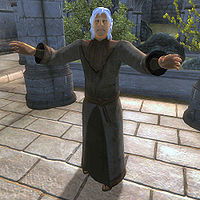 The Prophet preaching to the people in Anvil 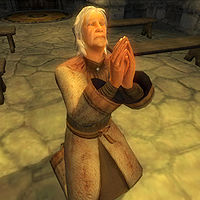 The Prophet prays in the Priory of the Nine

The Prophet is an Imperial added by the Knights of the Nine official plug-in. You will meet the Prophet first in Anvil during the quest Pilgrimage. After the restoration of the Priory of the Nine, he will disappear from Anvil forever.

The Prophet came to Anvil with little goods, carrying only his tan robe, sandals, and three Wayshrines Maps.

This is the complete text of the speech (rant) delivered by the Prophet when he is standing outside the Anvil chapel.

Hear me, o people of Cyrodiil! Look well upon the Chapel of Dibella. Look at the faces of the dead. This is your future. Evil has returned, and the Nine need a champion! Is there no one who would stand for the Nine? Now Mara's children cry out from beyond the grave for vengeance! How many more must die at Umaril's hand?
I AM CYRODIIL COME, he said, Old Reman, born from the earth that IS Al-Esh, and yet he would scorn this country now! Repent! I say again, REPENT! The blood of Dibella's slaughtered acolytes cries out for vengeance. Vengeance! Who will take up this holy crusade? Love and Mercy! Do you still think me mad? Who shall next fall to Umaril's bloody revenge?
The Eight And One require a champion, a Divine Crusader reborn. Pelinal Whitestrake once struck down the enemies of man and god. Who will now reclaim his Relics and fight again for the true faith? There are loremasters among you, heads so heavy with learning that you cannot raise your eyes to the heavens to see the truth there written! Cut eight-wise he was, Pelinal the Blamer, champion of Men, and though dispersed he left us a warning! Heed it!
Umaril is returned, as was foretold by the head of Pelinal to the Bull of Kyne in those days of old Cyrodiil. Who will walk the Pilgrim's Way, as did the questing knights of old? The blood tide rises! Will no one take up this holy crusade? Will no one walk the ancient Pilgrim's Way? Oh unhappy Tamriel! Where is your Divine Crusader, in these latter days of petty strife and lesser men?

Umaril -- yes, your children know that name if you do not. The Dread Castellan of fearful legend. Did you think him a myth? Or dead? Have you not heard the Abadal-a [sic]? Spoke Peninal [sic]: "Beware, Morihaus, beware! With the foresight of death I know now that my foe yet lives, bitter knowledge to take to my grave..." "Better that I had died believing myself the victor. Although cast beyond the doors of night, he will return.""Be vigilant! I can no longer shield the host of Men from Umaril's retribution." Thus spake Pelinal in the hour of his death.

The Unfeathered has come during the Breaking of Gates! His golden-wickedness will hold fast against all arms except those of his ancient foe, the Whitestrake!

The gate, once open, cares not who passeth through. Our ancient enemy has returned, from the deeps of time, to exact his revenge upon the gods. The gods, the Eight Attendants of Saint Pelinal when he smote down Umaril the Unfeathered...

Are there no ears to hear the warnings? Are there no eyes to witness the Wheel's breaking? The Eight and One favor only the righteous! And too few of you remain! The Thief has found the lock that he cannot break! The Warrior, the foe that cannot fall! The Wizard, an incantation that takes not to his tongue! Truly this is the Age of the Serpent and the Void that follows! The Guardians have fallen and no one remains to watch their charges, and all the heavens are now banquet for the Princes of Misrule!

And Talos said to the Arctus, "Let us join as one to fortify this throne, this land, these people, each one glorious under heaven!" Would you not do the same, children of Cyrodiil? No, you would not! This is plain! You looked away when the fires flickered, and now act lost that they are gone! Only death remains for Tamriel! Death and oblivion!

"That all the Interplay is one flea of assertion on a wolf of naught." It is by these heresies that you fall from grace! Shame on you, people of Cyrodiil, and more shame for the children that you give freely to the mouth of Destruction!

The Al-Esh is near! Mother of the Empire! She weeps for fallen Cyrod and all her children that call it home for truly she is the mother to us all! Citizens, the Queen of Stars asks you: where is her issue? Where are the men who can walk in her steps? In whose blood has the dragon taken purchase? Alessia! Reman! Talos! They cry for blood akin to theirs to rekindle the dragonpact! Citizens, take to your knives! Are there no ears to hear the warnings? Are there no eyes to witness the Wheel's breaking?

You pore over your dusty tomes of lore. You study ancient genealogies and bloodlines. Look you to blood for truth? There is truth in blood, but it is not the truth that you seek! The truth is written in the blood of the innocent, there in the Chapel of Love! Can you not read the ancient runes? "As oiobala Umarile, Ehlnada racuvar!" A curse and a threat to those who have eyes to see and ears to hear! Are there are any among you who still understand the ancient tongue? "By the eternal power of Umaril, the mortal gods shall be cast down."

Who will match the deeds of Sir Amiel and his companions when they smote the Wyrm of Elenglynn to recover the Cuirass of the Crusader?

Think on this -- what happened here is only the beginning.