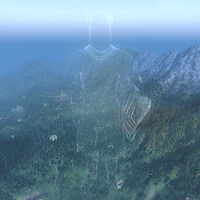 Pelinal Whitestrake is the Divine Crusader, a character added by the Knights of the Nine official plug-in. In the First Era he fought on behalf of the human slaves of Cyrodiil using enchanted gifts bestowed upon him by the Eight Divines.

He slew the Ayleid Sorcerer-King Umaril the Unfeathered in order to free Cyrodiil from the Ayleid oppressors and ushered in a new era of peace. His victory was short-lived as Umaril's cohorts quickly defeated him afterwards. Dying, Pelinal realized that Umaril would one day return and seek his vengeance on mankind and the gods who aided him.

He is first mentioned by The Prophet in front of the destroyed Chapel of Dibella in Anvil. After completing the Pilgrimage quest, you receive a vision from him to receive the quest The Shrine of the Crusader. Throughout many of the Knights of the Nine quests, you will retrieve the Relics of the Crusader, the armor and weapons of this holy knight, which are needed to destroy Umaril the Unfeathered again.

After completing your pilgrimage, Pelinal will appear to you in a vision and give the following speech: "Hail knight! You seek my Relics with a worthy heart! Your prayers have woken me from my endless dream. Or perhaps you have entered my dream, and I still sleep. I think others have sometimes spoken to me, others like you, but my memory is doubtful. Perhaps the others came after you. Your need must be great for the gods to allow us to speak. Has Umaril the Accursed found a way back? The foulest of a foul race. A thousand curses upon his unholy name! I thought I'd won. But I should have known. The Slavemasters are a cunning breed. Umaril found a way to cheat death, as I could not. If you would seek for my Relics, I know little that can help you. All that has passed since my death is like mist that my mind cannot take hold of. My friends built a shrine upon the site of my death, where the Elves tormented me in a final act of revenge. I can show you where it once stood. Perhaps it is there still. Fare thee well, sir knight. May the gods grant you to destroy Umaril utterly, as I failed to do."