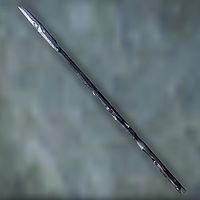 The Daedric artifact Wabbajack is a staff given as a reward for completing Sheogorath's Daedric quest. It transforms any non-NPC creature into another random creature for 10 seconds. It is highly unpredictable, as any gift from the Madgod would be. Only one creature may be Wabbajacked at any time (but you can repeatedly Wabbajack the same creature if you wish).

Only a limited number of creatures will be created by Wabbajack, all equally likely: Daedroth, Deer, Goblin Skirmisher, Ogre, Rat, Sheep, Skeleton Champion, or Troll. Using Wabbajack to hurt an opponent is of limited value. The newly created creature is always at full health and cleared of any effects active on the original creature (damage over time, soul trap, poison etc.); after the 10 seconds the original creature reappears at full health (even if it was injured before being Wabbajacked). Therefore, if you are not careful, the only result of Wabbajacking may be to fully heal your opponent and/or drain your own resources.

See also the book "Wabbajack" for a small story behind this item.