Oblivion:Priory of the Nine (quest)

This quest only becomes available once you have downloaded the Knights of the Nine official plug-in. 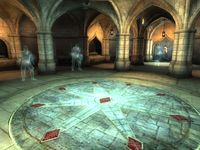 "Step forward, adventurer, and face us each in honorable combat."

The Priory of the Nine is located in the West Weald; a marker is added to your map when you read Sir Amiel's journal. Within the main building of the priory you will find a large symbol on the floor. Activate it; as long as Sir Amiel's Ring is in your inventory, the floor will drop down to reveal a door to the Priory Basement. Enter and make your way through to the door to the Priory Undercroft.

The Test of Worth

In the Priory Undercroft you will find the ghost of Sir Amiel. He informs you that he and the ghosts of the seven other present Knights of the Nine will test your worth in honorable combat before you will be allowed to take the Cuirass of the Crusader. One by one, you will combat each of the ghostly Knights, Sir Amiel lastly.

The exit from the Undercroft is sealed once this challenge starts, so you should make sure you are well prepared for the challenge before entering the Undercroft. There is a brief pause between each knight's challenge, which provides a quick opportunity to heal and repair armor, but you are not provided with a chance to truly rest and recover.

When you have defeated them all, you will be allowed to take the Cuirass of the Crusader. You are also given the rank Knight Commander in the Knights of the Nine faction.

Talk to all of the ghosts to learn what they know about the various artifacts and to find out more about the history of the Knights of the Nine. Four knights in particular have specific information about the location of an artifact. Talking to each of them will allow you to start a quest to retrieve that item:

This quest is not complete until you have collected all four of these artifacts. At that point, return to the Priory of the Nine, where a new arrival, Lathon, will approach you. After he has talked to you, this quest will be marked as completed (and the subsequent quest, The Faithful Squire, will have started).