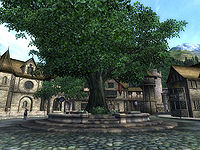 The Great Oak of Chorrol

Chorrol is a medium-sized town in northwestern Cyrodiil, between the Great Forest of west Cyrodiil and the Colovian Highlands of the Hammerfell border. The city is divided into five main districts: Fountain Gate, Castle Chorrol, Chapel Street, West District and the Great Oak Place. Situated in the rugged highlands of Colovia, the city's grounds are strewn with large boulders that set the mountainous mood of the city as much as they serve as obstacles to pedestrians. The walls are well-fortified in anticipation against attack, with watchtowers placed at regular intervals along its length. The ruler of Chorrol at the time of the Oblivion Crisis was Countess Arriana Valga, widow of the hereditary Count of Chorrol.

† Only appears with the Knights of the Nine plug-in. 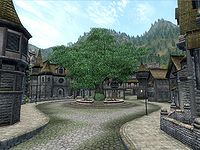 View of The Great Oak Place from Fire & Steel in Chorrol 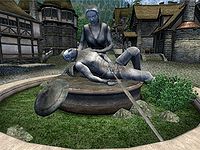 The statue in Chorrol