Leyawiin is a Cyrodiilic city in the extreme southeast of the province, by the mouth of the Niben River where it opens into Topal Bay. Located on the small strip of land between the provinces of Elsweyr and Black Marsh, the recently ceded Trans-Niben, it has a sizable population that includes many Khajiit and Argonians. Marius Caro is the Count of Leyawiin. 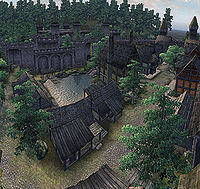 View of the Castle from top of Ra'Jahirr's House in Leyawiin

Statue of Zenithar near the Chapel in Leyawiin