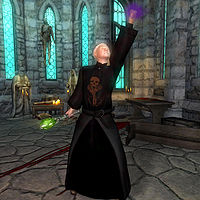 One of the two Necromancers in Cadlew Chapel

Necromancers are aggressive, spell-casting NPCs. They are always hostile towards the player and will attack you on sight. Necromancers can be found in various forts, caves, and Ayleid ruins, as summarized at Necromancer Dungeons; in addition, they have taken over Cadlew Chapel.

Necromancer Adepts are the boss-level necromancers, and are only found in dungeons. Twelve dungeons have a single Necromancer Adept, typically as the final enemy you will encounter. One additional dungeon, Moss Rock Cavern, contains two.

There are several specialized types of necromancers, in particular because of the importance of necromancers in various Mages Guild quests. These include:

† The number of possible potions received changes depending upon your level, as does the quality of the potions. Individual Restore Health potions have a 19-38% chance of appearing; individual Restore Magicka potions have a 38-75% chance of appearing.
‡ Because the five necromancers in Howling Cave are spawned at the start of the game, a leveling quirk causes these NPCs to have unusually large numbers of potions, especially at higher levels.
†† If the Spell Tomes official plug-in has been installed, each of these scrolls has a small chance (<10%) of being a leveled spell tome instead of a scroll.

Level: This is the NPC's level relative to your character.

Being spell-casters, necromancers have a special "Necromancer Birthsign" that provides +50 Magicka and a 33% resistance to poison. Depending on their race, they can therefore have +50, +100, or +150 maximum magicka. As with Conjurers, Silence spells or a silence-enchanted weapon can be useful to prevent them from casting spells at you.

Each necromancer will be able to cast 5 randomly selected spells: two Conjuration, two Destruction and one Restoration. In each case the effect is randomly determined from the following list while the strength of the spell is randomly based on the necromancer's skill level (except for Necromancer Adepts, for whom the strength of the spell is always the best possible for the necromancer's skill level). The possible effects for each school are: