Locating the Shrine of Meridia

Chart a course west-northwest from Skingrad's west gate to find Meridia's Shrine between Cursed Mine and Shardrock farm. You must be at least level 10 to start. Talk to Basil Ernarde at the shrine to begin.

Meridia, Lady of Infinite Energies, is associated with the energies of living things, and has a particular dislike of undead creatures. Bring an ingredient from an undead creature (Mort Flesh, Ectoplasm or regular Bonemeal) to the shrine to talk to her. Once presented with the proper offering, Meridia will speak to you:

By the detritus of the profane, I am brought forth. And by your offering, you have made the profane your interest, mortal. The undead are foul, unnatural things. Some of my rivals take pleasure in these abominations. Not Meridia. I wish these creatures destroyed. Hidden behind a door, deep in Howling Cave, are necromancers. They rob graves for the materials to raise their undead armies. Find these necromancers. Destroy them and their abominations. Do this, and earn the gratitude of Meridia.

Go to Howling Cave, which is east of Castle Skingrad. The necromancers are located directly behind the door at the end of the northern passage, so only enter if you are prepared for a fight. The necromancers have several potions (due to a bug) and are aided by several leveled undead in addition to their own summoned creatures, all of which can quickly overwhelm you through their sheer numbers. It is recommended that you kill the necromancers first to prevent them from summoning additional creatures. Use of enchanted weapons, fire damage potions, and stealth may also also be useful.

Return to the shrine after all five necromancers are dead, and Meridia will applaud your actions:

Well done. Those creatures were an affront to all life, and they have paid the price for their actions. Take this ring and go with my blessing.

Meridia will reward you with the Ring of Khajiiti, a ring with Fortify Speed (+10) and Chameleon (35%) enchantments. 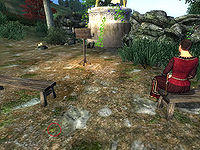