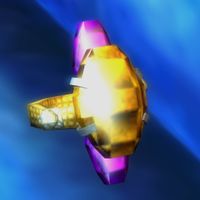 The Ring of Khajiiti (or sometimes just Ring of Khajiit) is an ancient Daedric artifact, many centuries old, dating back to at least the Second Era. It is associated with two Princes, Meridia and Mephala, who have both been known to offer the Ring in return for service. It is said that the ring makes the wearer invisible, silent, and quick.

The Ring was originally owned by Mephala, until it was stolen off her arm by Rajhin, the renowned burglar who later became revered as the Thief God of the Khajiit. Using the Ring's powers, Rajhin became the most successful burglar in Elsweyr's history. It is even said that Rajhin stole a tattoo from the neck of Empress Kintyra as she slept. Eventually, after making use of its power too freely, Rajhin was abandoned by the Ring and left exposed to his enemies.

The ring is obtained from Meridia after you finish her quest.