One other implication (possibly an unintentional developer oversight) of the special Lich faction is that full Liches do not like each other. If two full Liches spawn near each other in a dungeon they are very likely to start fighting each other.

Most liches carry a magical staff that is randomly selected from a list of 25 possible staves. These staves are all high-level varieties (e.g., "greater" varieties of Generic Staves and other staves that normally only appear at level 18), since standard liches are only encountered starting at level 26. However, summoned liches and the King of Miscarcand can be encountered at any level. They therefore provide a possible way to obtain very powerful staves as early as level 1 (see Summon for notes on how to obtain a summoned creature's weapon). 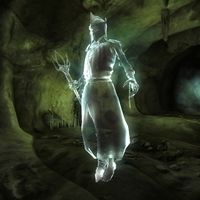 Nether Liches are weaker forms of the villainous Lich. Because of this, they are encountered at lower levels and are extremely challenging for unprepared adventurers. They can still be encountered when Liches can, although they are much rarer.

Besides the considerably brighter appearance, they look identical to standard liches. All lich bosses can be a Nether Lich or a Lich, depending on the level of the player at which they are encountered.