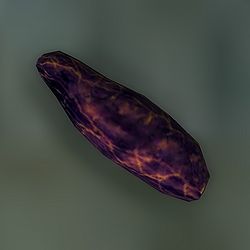 Shade of the Revenant 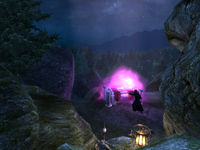 Black Soul Gems can only be created during the "Shade of the Revenant." As part of this phenomenon, a purple light shines down from the sky on each of the four Necromancer Altars.

Each Shade of the Revenant starts at midnight and lasts for 24 hours, until the end of that day at midnight (although the Shade may not actually be visible during daylight hours). The Shade of the Revenant occurs on the same day at all four locations. It happens every eight days, starting from the first day of the game (i.e., the day on which Uriel Septim enters your cell in the Tutorial). The dates during the first three months of gameplay (all in year 3E433) are listed below;

If you continue playing past the last date shown on this table, the Shade will continue to occur every eight days. To calculate when the shade will occur you have to add seven to the days that passed and then divide by 8. If the number you get is whole then that is a shade day, if not, round that number to the next whole number. Then multiply by 8 and subtract 7 and you will get the next shade day.

When you are in jail the count of days will freeze and resume only when you are released. So if you are in jail more than a day, to calculate the shade days use the same procedure but add the number of days you've been in jail to the days that have passed since the beginning of the game.