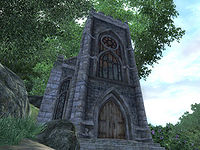 Cadlew Chapel is a defiled chapel east of Bravil containing necromancers. It is located on the north bank of the Silverfish River, near the estuary, directly across the river from the Ayleid ruin of Nenalata.

The sanctuary has been desecrated by necromancers; two of them can be found here, as well as a dead treasure hunter lying on a bloodstained table, a couple of inanimate zombies, and a corpse hanging above the altar. A chest and a pair of rugged pants can be found near the dead treasure hunter's body. On the small bloodstained table in front of the altar, amidst several severed limbs, are two human hearts.

Near the door on the right side there is a wooden ladder leading to a small cupola on top of the chapel. This contains a skeleton and a locked chest. The cupola also offers an amazing view, and the city of Bravil can be seen across the water.

A Nirnroot can be found outside, just left of the entrance door.