If you ask around town in Cheydinhal, people will tell you that Rythe Lythandas, a famous painter, has gone missing, and his wife, Tivela, is very upset. Go to the Lythandas house on the south side of town, and talk to Tivela for more information. Tivela tells you that Rythe had locked himself in his study, as he often did. However, after not seeing him for several days, Tivela decided to investigate. Upon doing so, she discovers that Rythe has disappeared.

Tivela gives you the key to Rythe's study. Open the door and take a look around. You should notice fairly quickly that one of the paintings is actually a door. Enter the painting. You soon arrive in a painted semblance of the great forest, and Rythe is standing near you. He reveals that a thief stole his magical paintbrush, which allows him to enter paintings to make them look more realistic. The thief created some painted trolls to guard him, but instead they killed him. Rythe needs the paintbrush so that both of you can escape. If you ask him about the painted trolls, he gives you six bottles of turpentine, which do a level dependent amount of damage (see chart below) to painted trolls when applied to your weapon. 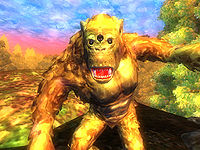 One of the six painted trolls

There are at least six painted trolls that tend to be hard to kill. Two applications of turpentine generally kill one painted troll, but depending on your level you may need up to four (see the table below.) Fire damage works similarly on painted trolls as on standard trolls. The trolls also cannot jump or climb, so rocks can provide a safe haven for your character during battle. However, they are fast, and you will generally not outrun one for long. Each troll also has painted troll fat, a unique ingredient with different properties than regular troll fat. This quest is the only place in Oblivion where you can get it, and it can not be duplicated in the Enchanted Chest. Therefore, you may want to kill as many painted trolls here as you can find.

You can evade most of the trolls if, instead of following the path, you travel south and a bit west over the rocks from where you start. You will still have to kill the one or two trolls closest to the thief's corpse, but with six bottles of turpentine, this shouldn't be a problem. You can also lure them to Lythandas, who, although weak, is essential and will not die.

After looting the thief's corpse and returning the brush to Rythe, he paints a portal back to Tamriel. When you arrive, stick around and listen to the conversation he has with his wife. Afterwards, he'll give you the Apron of Adroitness, a light armor chest piece with a leveled agility and intelligence boost. If you do this quest early and want to wait for better gear, you should leave while Rythe and Tivela are still talking. Come back later to receive your now higher-level apron. This works because the apron level is determined the moment you receive it from Rythe.

There seem to be several "sweet spots" for the best level to do this quest. Both the Trolls and the Turpentines are leveled, but the Turpentines only increase in damage every 4 levels, while the Trolls increase every level, so if you do the quest at either level 1 or a multiple of 4, you will do optimal damage with the Turpentine. Level 1 is clearly the best time to do this quest as seen from the chart below. Turpentines do not increase in damage after level 20 so it will only get harder after that. This chart does not take into account the damage from the weapon you use to deliver the poison. 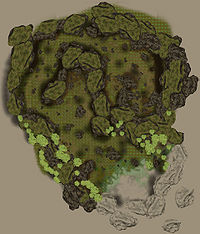