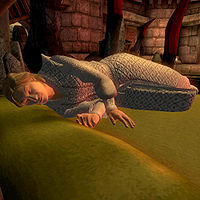 Arkved is an Altmer mage caught in a nightmare of his own creation for having stolen Vaermina's orb. You will find him in his tower south-southwest of Cheydinhal. He is asleep and will not wake up no matter what, and remains asleep for the entire game.

He wears the semi-rare white mage's robes and white mage's shoes. Apart from that, he only carries a small amount of gold. His spell selection consists of a leveled Mage spell "pack" of sorts; this pack includes major Destruction, Illusion, Alteration, Restoration, Mysticism, and Conjuration (excluding Bound Armor) spells, as well as minor Destruction spells.

During the Vaermina quest, you must traverse Arkved's Tower in order to take back the stolen Vaermina's Orb. Across the room from Arkved, adjacent to the orb on the desk, are some notes that Arkved wrote before he entered his nightmarish state, in particular a note written in a trembling hand, and two crumbled pieces of paper, both nightmarish ramblings from Arkved, realizing his fate.