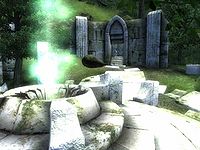 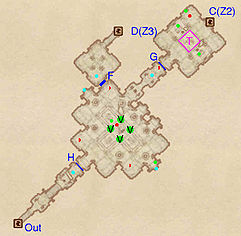 This level is pretty straightforward: except for enemies the only obstacle you will find is a Ceiling Spike trap at location T on the map, which can be easily detected and bypassed. You can even use the trap to your advantage while fighting the enemy in the last room.

In the first big chamber there are four valuable Varla Stones (V) which are protected by an enemy. The switches for the Varla cages are separate: an alcove on the southeast wall contains a Push Block (cyan dot) which opens the south and east Varla stone cages; an alcove on the northwest wall contains a Push Block which opens the other two. In the last room, be sure not to miss the Ayleid Chest which is hidden behind an altar against the northwest wall.

In the north corner of the first chamber is passageway behind a Hidden Door (F). Door F can only be opened from the north side of the door, by stepping on a stone block (cyan dot). You will reach this area when returning from the final zone through door D.

Exit the level to the second zone by using door C.

Zone 2: Tombs of the Undead 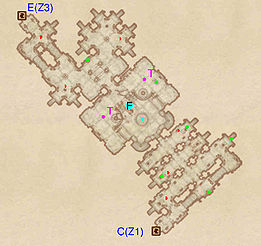 Tombs of the Undead

The start of this zone may be troublesome; if you just run in you may well be detected almost immediately by the first enemy, and fighting it will most likely also bring two others into the battle. You can avoid all of them by sneaking straight ahead and up the stairs (which is the only path to the end of the zone), although this will cause you to miss three minor treasure containers.

Continue along the raised corridor to enter a chamber where you will have to activate the Stone Steps at F with the pressure plate in front of it (cyan dot on the map). This chamber also contains two Gas Traps (T) which can be easily avoided to reach the chest in the right corner.

The next chamber holds little except up to three enemies which could attack you at once after you start fighting with one. 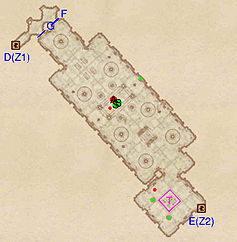 This zone basically consists of a small chamber linked to a huge, rectangular shaped one. The spike trap at the entrance can help you take care of the first enemy. Be careful not to miss the minor loot chests inside the columns.

The large chamber contains all five of this ruin's Welkynd stones. They are easily reclaimable from atop their pedestals between the entrance and the altar in the middle. On the altar is an Ayleid Statue and a Boss-level Ayleid Reliquary (B) guarded by the Necromancer Boss (A) and another enemy.

At the end of the room you will find two locked doors which provide access to the passage leading to door D.