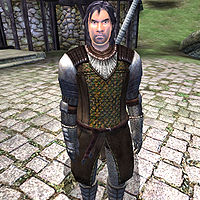 Ulrich Leland is a Breton knight and the Captain of the Cheydinhal city guard. His policies on hefty fines and strict enforcement have made him rather unpopular with most of the residents of the city, and even some of the other guards. Investigation will reveal that Ulrich is not entirely honest with the proceeds of these fines.

Before the related quest, Ulrich will not talk to the player. If engaged in conversation, he will tell the player, "Get out of my way before I have you slapped in irons" and exit the conversation.

Ulrich wields a silver battleaxe in combat. He wears chainmail boots, chainmail greaves, and chainmail gauntlets. He wears a Cheydinhal Cuirass clearly revealing his identity as a Cheydinhal Guard. He carries the keys to Castle Cheydinhal's interior and exterior, and one to his quarters in the Cheydinhal barracks. He also carries a small amount of gold. Ulrich has the ability to use a leveled set of knight spells.