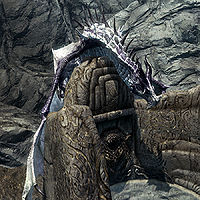 A dragon guarding a word wall

Dragons (drah-gkon and dov-rha to the ancient Nords, or dov in their native language) are large flying reptilian creatures that are encountered in Skyrim. They are immortal, highly intelligent, and have an affinity for magic, and were once even worshipped by the ancient Nordic people. Temples dedicated to dragon worship were built across the province of Skyrim, but now only a few artifacts relating to the Dragon Cult remain, such as dragon claws and Dragon Priest Masks. Once thought long dead, dragons are now beginning to return and are a major part of Skyrim's main quest.

There are several encounters with dragons during the main questline, though randomly generated dragons also appear in the wild after the completion of Dragon Rising. Although the majority of dragon encounters will involve only a single creature, in rare cases it is possible to come across two or more of them at a time, especially after fast-traveling. All dragon lairs contain word walls and are indicated by a dragon's head icon on the map.

Dragons are also often encountered soon after fast-traveling to a relatively wide open location, within smaller towns like Riverwood and Rorikstead, or even inside large walled cities like Whiterun and Markarth.

Dragons are fearsome opponents in combat and are some of the most dangerous creatures in all of Tamriel. As your level increases, more difficult types of dragons will appear, ranging from a basic dragon at the lowest levels up to a mighty legendary dragon at the highest. Encounters with dragons in the wild are heralded by a loud roar; the dragon will often fly very close to you if it has spotted you, causing a palpable rush of air, almost as if the dragon is deliberately trying to provoke you. Not all dragons are automatically hostile to you, however. Some will simply circle overhead for a while without engaging in combat; if you ignore it long enough, the event will end and the dragon will fly off.

Dragons are highly intelligent and can use the power of the Thu'um (also known as "The Voice" or Dragon Shouts) to attack their enemies, using short phrases of words of power to cause a variety of effects. It is said that combat with dragons is actually a debate; as the dragon Paarthurnax explains, "There is no distinction between debate and combat to a dragon. Tinvaak los grah. For us it is one and the same."

All dragons have either frost- or fire-based breath attacks and will use them while airborne and while on the ground. The damage inflicted by this attack can be decreased with the appropriate elemental resistance, magic resistance, and wards. During combat, dragons will occasionally land on the ground to briefly engage in melee with you or any NPCs or other creatures in the area before taking flight again. Dragons may also perch on rooftops or other features, such as word walls, attacking creatures below them while keeping out of reach of melee attacks. The Dragonrend shout can be used to force a flying dragon to land for a short time. Once a dragon is at about half of its health, it will either land on the ground (often with a clumsy crash) and not take flight for the rest of the battle or, rarely, flee combat altogether, depriving the player of a dragon soul to absorb. 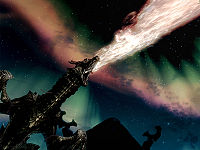 A Blood Dragon attacks with its Fire Breath

While a dragon's breath is a formidable attack in its own right, dragons also have a devastatingly powerful bite. It is important to keep your health high when close to a dragon on the ground. If your health drops below a certain threshold and you are close to the dragon's head, the dragon may kill you with an action sequence: it will lunge forward and grip you in its jaws, lift you in the air, swing you from side to side, and then throw your corpse to the ground. Staying to one side of the dragon while it is on the ground can help keep you clear of its bite and breath, but the dragon will still be able to lash at you with its wings or tail. You can try using trees and other landscape features to gain a cover advantage, but the game may not register all forms of cover and the dragon may still be able to attack through them, so choose your hiding places carefully.

Dragons will attack nearby creatures of any kind, from mudcrabs to giants. You can use this to your advantage by engaging a dragon where other creatures are nearby, especially if the dragon has already selected alternate prey, using the distraction as an opportunity to move in for the attack. Dragons will even target other creatures while engaging you in combat, so fighting alongside followers and other NPCs or creatures makes surviving a dragon assault much more feasible, since damage can be absorbed by others. However, the presence of other creatures does not guarantee the dragon will attack them instead of you, even if it was already fighting them when you arrived. Other creatures will also preferentially target dragons, even if they were fighting something else first, since the dragon is the more threatening foe.

When you slay a dragon in combat, the body of the beast will be engulfed in flames, and you will absorb its soul. After the flames subside, you will be left with the dragon's bare skeleton, which can then be looted for its bones, scales and other miscellaneous treasure. The scales and bones can then be used to make formidable armor. If the Dawnguard add-on is installed, the dragon's bones can also be used to create and temper Dragonbone weapons. Dragon souls can be saved and used to unlock Dragon Shouts and, with the completion of the Dragonborn questline, reset skill perks.

Dragons have long, slender extremities covered in scales, and large, thin, leathery wings. Their feet are tipped with three sharp talons and one vestigial digit known as a dewclaw, a characteristic that can be seen in their written language. Dragons have horns and spiked ridges along their backs and are several times larger than any human or elf. They have two hind legs but no forearms, so they use their wings to crawl when they are forced to traverse along the ground.

With the exception of a few unique dragons, there are several varieties of dragons that can generally be distinguished by their color. The table below lists the dragon colors found in the game.

In addition to the special abilities listed below, all dragons have a special Dragonskin perk, which negates 50% of all damage from any attacker except the Dragonborn. Except for basic Dragons and the Skeletal Dragon, all dragons also have an ability called "Dragon Bite", which grants them a constant Fortify Unarmed Damage effect. Dragons are immune to paralysis and cannot be soul trapped.

Dragons have their own unique "dragon" versions of the Fire Breath, Frost Breath, Unrelenting Force, and Drain VitalityDG shouts, and their Fireball and Ice Storm spells are treated like shouts as well. Dragons rely on their magicka reserves to use these shouts, which means that if a dragon's magicka is drained, it will not be able to use its shouts. The base damage for all the dragons detailed below is 25 (with the exception of the Skeletal Dragon), and their tail swipe attacks will stagger all enemies in a large area.

The sections below detail the attributes and abilities of each of the various types of dragons. The types of dragons that spawn in the wild will depend on your level, but regardless of your level, dragons' combat abilities and their centrality to the game's plot effectively make them game bosses. Note that although the different varieties of dragon normally start to appear at the player level indicated, it is possible, though rare, to encounter a more powerful dragon at a much lower level. 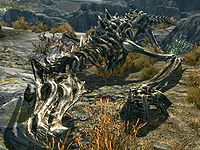 The standard loot for dragons is listed below, revered and legendary dragons give additional loot.

With the Dragonborn add-on, you have the ability to ride specific dragons after obtaining all three words of the Bend Will dragon shout. After shouting at the desired dragon, it will land and you will be able to get on its back, and it will engage in flight. You give the dragon instructions, rather than directly controlling the dragon. There are a few dragons that you are unable to ride.

Achievements related to dragons are: 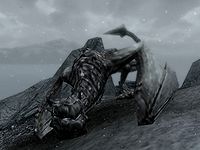 A dragon with the LOD texture bug

For more information on the dragons of the Elder Scrolls universe, see the lore article.