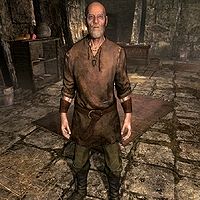 Esbern, an elderly Nord conjurer, is a chronicler and agent of the Blades who has survived the investigations of the Thalmor by hiding in Riften's Ratway. Long obsessed with the foretold return of the dragon Alduin, the World-Eater, Esbern serves as your mentor, guide, and advisor. Despite this, once he learns of Paarthurnax's existence, he will demand that you slay him and will refuse you any aid until you have done so.

Esbern wears miner's clothes initially, but changes into mourner's clothes once you reach Sky Haven Temple with a pair of boots, and carries an ebony dagger and a selection of lower-class items and gold. In combat, he relies on mainly Destruction spells, and occasionally summons leveled atronachs.

Sometimes, when you go to talk to Esbern about finding an Elder Scroll, he can be found in the exterior courtyard of Sky Haven Temple, telling Delphine by torchlight about an ominous (and apparently prophetic) dream he used to have:

Esbern: "I used to dream of it. In the dream, I was standing… someplace high up… a tower, or a mountain. It was always just before dawn. The whole world was in darkness. Then came the flash of light – just on the horizon, within the clouds that mark the border between worlds. It could have been lightning, but there was no thunder. In the dream, the sense of foreboding grew, but I could never wake up. Then it came again, this time more distinct. Closer. Definitely not lightning now. It was orange – brilliant orange, the color of hearth and dawn. And a sound, too. Distinct and indistinct. Not thunder… something else. Something I should recognize, but in the dream I cannot place it. I want to leave my high place, to seek shelter. From what, I don’t yet know. In the manner of dreams, I cannot escape. I’m forced to wait and watch. Then, finally, realization and horror arrive together. The orange is flame, heat. The sound a roar, a challenge in their ancient tongue. But now it’s too late for escape. The dragon is upon me – fire and darkness descending like a thunderbolt. And not just any dragon, but the Dragon – Alduin, the World-Eater, the dragon who devours both the living and the dead. And then I would wake up. And hope that it was just a dream… but know that it was not."