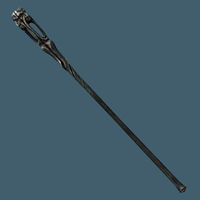 Wabbajack is a Daedric artifact given to you by Sheogorath in The Mind of Madness quest. The staff applies a variety of random effects on the target it is used against. It can randomly cause fire, frost, or shock damage, absorb health, make the target invisible, heal the target, and in some cases instantly kill the target. Along with its offensive abilities it can also randomly transform a target into a chicken, rabbit, mudcrab, Dremora or very rarely a sweet roll or a bottle of wine, or even more rarely into a shower of gold coins. Transforming the target into a sweet roll or gold coins usually terminates the target. However, if the Wabbajack is used to transform a target into an animal, it only delays the fight as they often transform back a short time later with full health (using it on the same target will return them to their true form where the fight can continue as normal).