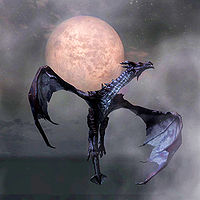 Odahviing is a Red Dragon that becomes your ally as part of the main quest. He can be summoned with the Call Dragon shout only while you're outdoors. This shout is simply his name, Od-Ah-Viing, Snow-Hunter-Wing. He can be seen flying around The Throat of the World, awaiting your call, once the main quest is complete. He can be very useful at any level as he is impossible to kill and won't leave you until all nearby enemies are dead. He uses the Fire Breath shout and standard dragon melee attacks as his weapons. 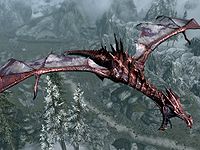 Immediately after his capture -

Nid!
Horvutah med kodaav. Caught like a bear in a trap...
Zok frini grind ko grah drun viiki, Dovahkiin.
Ah. I forget. You do not have the dovah speech.
My... eagerness to meet you in battle was my... undoing, Dovahkiin. I salute your, hmm, low cunning in devising such a grahmindol - strategem [sic].

Opening dialogue for the first time -

Zu'u bonaar. You went to a great deal of trouble to put me in this... humiliating position.
Hind siiv Alduin, hmm? No doubt you want to know where to find Alduin?

Asking where Alduin is hiding -

Rinik vazah. An apt phrase. Alduin bovul. One reason I came to your call was to test your Thu'um myself.
Many of us have begun to question Alduin's lordship, whether his Thu'um was truly the strongest.
Among ourselves, of course. Mu ni meyye. None were yet ready to openly defy him.
Unslaad krosis. Innumerable pardons. I digress.
He has travelled to Sovngarde to regain his strength, devouring the sillesejour... the souls of the mortal dead. A privilege he jealously guards...
His door to Sovngarde is at Skuldafn, one of his ancient fanes high in the eastern mountains.
Mindoraan, pah ok middovahhe lahvraan til. I surely do not need to warn you that all his remaining strength is marshalled there.
Zu'u lost ofan hin laan... now that I have answered your question, you will allow me to go free?
Aam? Serve you? ...no. Ni tiid. If and when you defeat Alduin, I will reconsider.
Hmm... krosis. There is one detail about Skuldafn I neglected to mention.
Only this. You have the Thu'um of a dovah, but without the wings of one, you will never set foot in Skuldafn.
Of course, I could fly you there. But not while imprisoned like this.
Indeed. Orin brit ro. I cannot leave here until you defeat Alduin, which you cannot do without my help.
Zu'u ni tahrodiis. It was you that lured me here and took me prisoner... vobalaan grahmindol. I have done nothing to earn your distrust.

(You did try to trick me into letting you go.)

Hin aar, orin nu. And yet here I am, still your prisoner.
You will release me - ro laan - if in return I promise to take you to Skuldafn and stop helping Alduin?
Onikaan koraav gein miraad. It is wise to recognize when you only have one choice.
And you can trust me. Zu'u ni tahrodiis. Alduin has proven himself unworthy to rule. I go my own way now.
Free me, and I will carry you to Skuldafn.

Speaking to him after he is released -

Saraan uth - I await your command, as promised. Are you ready to see the world as only a dovah can?
Zok brit uth! I warn you, once you've flown the skies of Keizaal, your envy of the dov will only increase.
Amativ! Mu bo kotin stinselok.

This is as far as I can take you. Krif voth ahkrin. I will look for your return, or Alduin's.

Odahviing's level is randomly determined when you enter onto the great porch of Dragonsreach during The Fallen quest, his level is then later reset as Dragonslayer ends on the death of Alduin but from that point is permanent. When his level is determined, the version is randomly chosen from all eligible ones. For example, the Odahviing for a level 18 player can be either level 20 or 40, but not 50.

Odahviing defending the Dovahkiin from an Elder Dragon