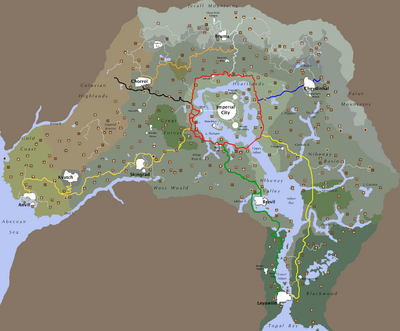 Map showing the routes of the various Unmarked Roads

In addition to the roads shown on your map, there are several unmarked roads that criss-cross Cyrodiil. These roads provide convenient access to many forts, mines, caves, and shrines. They are particularly useful in mountainous regions (often having steps and bridges to allow easy climbing) and if you are traveling by horseback. Although you won't come across any friendly Imperial Legion soldiers, these roads seem to have fewer enemies than the main roads (although you will still encounter animals and bandits).

This road diverges from the Orange Road right next to the Chorrol North Gate: when the Orange Road turns east, just keep heading north. Landmarks along the way are (in order):

This road winds through the Jerall Mountains. It connects to two other roads, described in the following sections: Bruma to Temple of the Ancestor Moths and Cheydinhal to Aerin's Camp.

Bruma to the Temple of the Ancestor Moths

The first section of this road is the same as the Bruma to Cheydinhal road, going past Dragonclaw Rock, Gnoll Mountain, and Frostcrag Spire before diverging. The split occurs just east of Fort Horunn, halfway between Fort Horunn and Silver Tooth Cave (both are clearly visible on your compass at the fork). From this fork, the road towards the Temple of the Ancestor Moths runs southeast.

This road starts at the Yellow Road, roughly halfway between the Corbolo and Silverfish Rivers, at a point due west of the unnamed lake on the map. There is a signpost on the west side of the Yellow Road; the Malada road heads east opposite the sign.