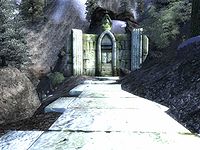 Upon entering, you are immediately faced with two intersections. The first is quite simple, and the two small rooms only contain one enemy while the second one is more complex. If you head left you will arrive at a hard-locked gate (C) which stops you from reaching the Ayleid Statue (S) needed for the related quest. The key for this gate can be obtained by going through the remaining portion of the dungeon.

Head right to arrive at a small intersection after having crossed a Swinging Blade Trap at T. The next few rooms contain a series of enemies, which are better dealt with separately to avoid having to fight with more than two at a time. The large room contains the boss chest (B) and the key (k), on top of a copy of Darkest Darkness.

The initial intersection can be somewhat confusing on the map: it is a two-way intersection that you first enter from the south. Although the map makes it look like a four-way intersection (with a fourth option to proceed northward), the fourth corridor is actually on a lower level. From the intersection you can either: 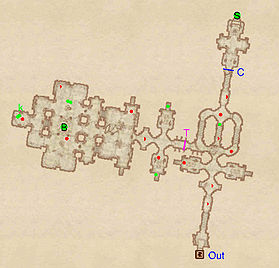