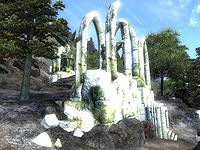 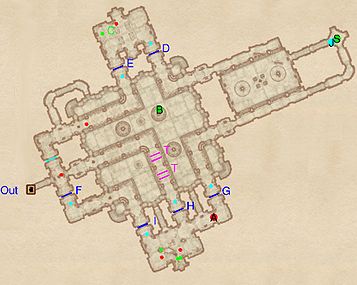 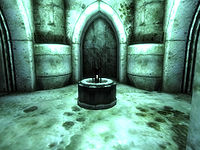 One of the Ten Ancestors

The Ayleid Statue is at the far east side of the dungeon (S on map). However, reaching the statue requires working your way through a minor maze of walkways, one-way gates, and water-filled rooms (both the main central room and the medium-sized eastern room are underwater). The other notable treasure, a boss chest (at B) is easy to miss, since it is perched on a column in the middle of the water.

The first two gates you pass (F and the unlabeled gate to the north) are both closed and are "opened elsewhere". In fact, the pressure plate for gate F (cyan dot on the south side of the gate) simultaneously opens both gates (see notes). When you first enter, your only option is to proceed east to the central room.

The central room is filled with water, with several walkways across the water connecting the various side rooms. If you can walk on water, navigating through this room (and thus through the dungeon as a whole) is much easier: simply walk across the water from one walkway to the next (and make sure not to miss the boss chest at B as you walk past), ignoring the complex set of one-way gates. Alternatively, with sufficient Acrobatics skill it is possible to jump back out of the water onto any of the walkways.

Otherwise, it's necessary to go through the maze the developers put in place. The first priority is to reach the southernmost room (necessary in order to open the gate at F). There are three main options for how to get to the southern room:

From that point on, the rest of the dungeon is more straightforward. Go through the gate to the north, open gates E then D, and reach the eastern room (again waterfilled). Jump into the water and swim to the underwater staircase on the east side of the room. The staircase brings you at last to the Ayleid Statue. You can return to the front door through the southern passage, opening gate G along the way. Be prepared, however, for the boss vampire (A) who will have appeared on the other side of gate G (even if you had previously cleared out the room).