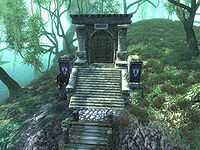 Pinnacle Rock is the home of the Mazken in the Shivering Isles, located in Dementia at the southern tip of the Madgod's Boot. This is the Mazken's most sacred place, as it contains the Wellspring of the Mazken. The souls of the fallen are called from the Waters of Oblivion to the Font of Rebirth by use of ceremonial chimes. The stronghold was a gift from Lord Sheogorath, and no mortals are usually permitted inside its sacred halls. 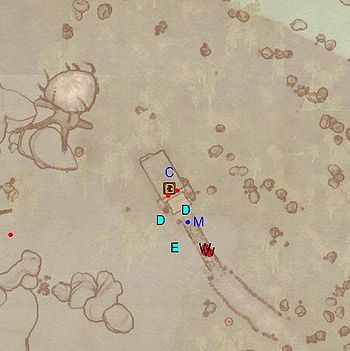 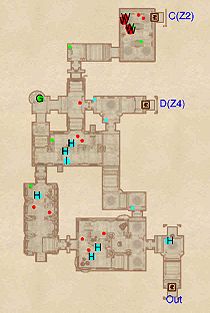 As you enter escorted by Adeo and two other Mazken, the corpse of a dead Seducer (H) suggests a tough battle ahead. The place is generally crawling with Knights and Priests of Order and pieces of Obelisk shoot up everywhere. The zone however, is very linear: just make your way to C, battling the Priests and Knights of Order you encounter on the way. In the third room, make sure to sound the chime at I, which will reveal a Crystal Chest at G. Loot all of the urns and chests and proceed to the next zone, the second zone. 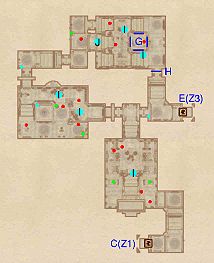 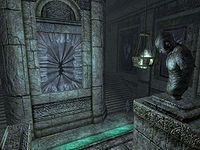 Once again, this zone is easy to navigate, so just fight your way to the final room, where Dylora is being held prisoner surrounded by crystal walls (G). Sound the chime at J to free her and once you've done talking to her, lead the group to the Pinnacle Rock, Hall of Devotion through door E. 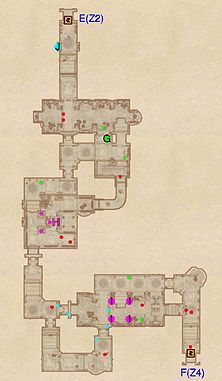 As soon as you enter, the Dark Seducers escorting you will fall petrified as Order has managed to shut down the font. Dispatch of the crystal wall blocking your path by sounding the nearby chime (J) and press forward. Once you arrive on a bridge, use this elevated position to snipe at the two Knights in the room below. Jump down and locate the crystal chest (G) on the southern wall; jump onto the ledge from the stairs close by. Head south and once again use your higher position to snipe at a priest below. Jump down and follow the corridor to a room with four chimes placed inside a cage, head up the stairs to the north and loot the urn, while avoiding the cave in traps at H.

At the next intersection, head right until you arrive on a bridge. This makes an excellent sniping position to attack the enemies in the room below, and the push block nearby (cyan dot on map) activates the hunger statue traps at I, giving you an edge in the fight. Once you dispatched him and the two patrolling knights, head for door F to enter Pinnacle Rock, Font of Rebirth. 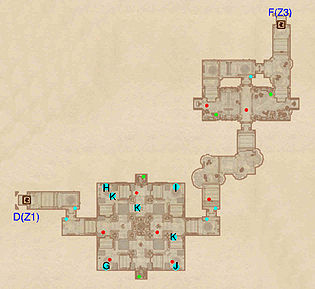 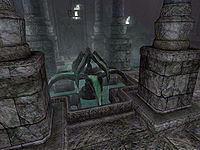 The restored Font of Rebirth

Although there is an intersection just as you arrive from door F, the gate can only be opened from the other side, forcing you into the lower level of the next room, where an enemy on a bridge is likely to spot you. Work your way up the stairs on the far side and across the bridge until you arrive at the large room holding the Font of Rebirth. You will have to activate the chimes at the four sides of the room (G, H, I and J) and defeat the knights and priests guarding them. Picking off individual knights through stealthy sniping is possible, although challenging. Once you have received your reward from the now-resurrected Dylora, head to door D for a quick exit to the first zone.