This article provides an overview of the new creatures added by Shivering Isles. Details about each creature type are provided on individual pages dedicated to each creature variety (see links provided in the article).

Baliwogs are commonly found near or in water. They regenerate health when swimming.

The Elytra are large insect-like creatures indigenous to much of the Isles. Apart from a slightly different appearance, the Mania variety and the Dementia variety are the same. 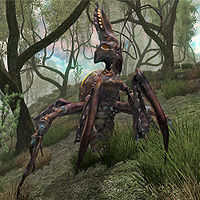 The Gnarl has the most unusual trait of being able to use magic cast upon it, and harness that power to bolster its own defense. Apart from a slightly different appearance, the Mania and Dementia varieties are the same.

Grummites can be found all over the Shivering Isles. They appear in different forms, and with different weapons. Grummites regenerate health when it is raining, or when they are swimming. 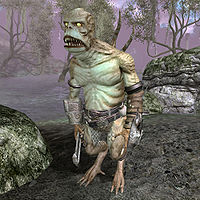 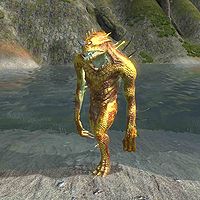 Scalons are commonly found near water, occasionally leaping from the water and attacking. They have the ability to become invisible, which they often use prior to attacking.

The Shambles appears to be some sort of undead construct made of bone and lashed together with wire or bits of cloth. When Shambles die, they trigger an area-effect Frost Damage effect. 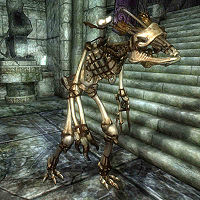 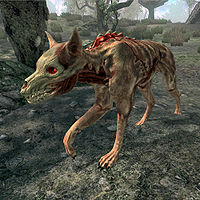 Skinned Hounds, apart from their unusual appearance, have no special abilities or attacks. They are often found accompanying other undead creatures.

The Flesh Atronach appears as a sewn-together conglomeration of skin and muscle adorned with mystical symbols and wearing an iron collar. They are commonly found in ruins with undead creatures. Flesh Atronachs are also summoned by Zealots to fight for them. Their appearance bears a resemblance to the Gatekeeper (albeit on a smaller scale). They previously appeared in Daggerfall. 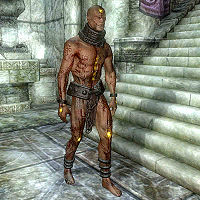 These thin skinned Daedra were previously seen in Morrowind, and serve the Daedric Prince Boethiah. They can be found all over the Shivering Isles. Heretics are known to summon Hungers. 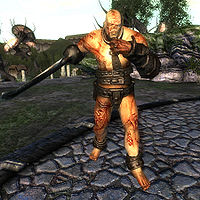