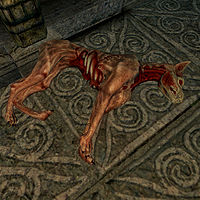 Ushnar's Skinned Hound is a dead skinned hound which can be found in the upstairs bedroom of Ushnar gro-Shadborgob. It was apparently his "old dog", and it will be given to the player as a reward for completing the related quest. Upon completion of the quest, the hound will be reanimated and will follow the player permanently, acting as a companion. The hound does not respawn and can't be told to wait, so it will be stuck with you until its demise.