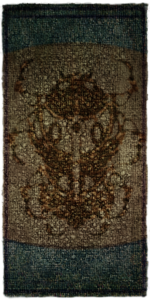 The Redoran Canton is one of the nine cantons in Vivec, located south of the Foreign Quarter, between the Hlaalu and Arena Cantons. It is controlled by House Redoran and hosts many services for its retainers and visitors alike.

The canton is also the site of two Morag Tong writs and several quests from Faral Retheran in the Redoran Treasury. It houses considerable Redoran treasures in its vaults. The Sixth House continues its assault on House Redoran in the sewers.

Saren Manor has a trap door leading to Toris Saren, who is hiding from a Writ. It makes a nice home afterwards. In the Dralor Manor is a key to the Vaults in an unlocked cupboard upstairs.

The Waistworks contains Redoran Prison cells, which leads to the Treasury, which in turn connects to the Plaza and the Vault. In the Treasury is Faral Retheran, a House Cousin and quest giver for House Redoran . A Scout and Drillmaster Quarters offers training. An Indoril helmet and shield are lying on a chest, another on a table. There are bunk beds for Redoran Retainers.

Shops include a Smith and a Trader who will give you The Dwemer's Bone quest. The tavern Flowers of Gold is a gathering place for thirsty warriors and others seeking their courage.

In the Lower Waistworks, the Redoran Temple Shrine offers Spell making services. The Redoran Records is a small library with mostly religious texts and two copies of the book Antecedants of Dwemer Law.

The Redoran Ancestral Vaults is guarded by three leveled Undead and an Ash Creature. It contains a crate with silver and magical weapons and three locked chests with gold.

In the northwest corner is a small Sixth House altar guarded by an Ancestral Ghost, complete with an Ash Statue, Corprusmeat along with a corpse holding a Rusty Key and a Daedric Dagger.

When you enter from the Treasury, you'll find the vault heavily guarded by retainers and Ordinators. Ahnassi might have told you about a key (see below) to the treasury in the Dralor Manor that opens two 60 pt. locked chests with gold and jewels. It also opens one of the lower vault doors that have 90 pt. locks and are trapped as well. Inside you'll find several pieces of Ebony Armor with a Cuirass, Greaves, closed Helm and a Tower shield, several pieces of Glass Armor and weapons, as well as gold and jewels.

This key can make the vaults VERY easy to rob; use the key to legally open the gate, go inside and wait for any guards inside to go out. Since the cell doors are, in the game's eyes completely solid and not see-through, you can go inside the cell and pick everything up. Just make sure no-one is inside.

Vivec, Redoran connects to the Arena, the Foreign Quarter, St. Delyn and Hlaalu Canton. There are no Gondola services here.

Ficheiro:MW-Map-VivecServicesRedoran2.jpg
Services in the Plaza