Stormcloak banner as seen in the Palace of the Kings

The Stormcloaks are a rebel faction led by Ulfric Stormcloak that you have the option of joining. They seek to defeat the Imperial Legion that controls most of Skyrim, end the Empire's rule over the land, and turn Skyrim into an independent country. They primarily rely on the use of axes and other melee weapons in combat, and use hit-and-run tactics to gain advantage over the larger Imperial armies. Most of the eastern half of Skyrim is currently under Stormcloak control, with the critical Whiterun Hold in central Skyrim remaining nominally neutral but friendly to Imperial traffic as the events of Skyrim unfold.

If you chose to follow Ralof to escape Helgen during the quest Unbound and then from the keep either accompany him on the road to, or leave and rejoin him in Riverwood, Ralof will invite you to join the Stormcloaks and direct you to Windhelm. In addition, Stormcloak soldiers encountered across Skyrim will likewise invite you to join their side, and the quest will be added to the log if it hasn't been earlier.

Regardless of whether or not you have previously received the quest, you can travel to the Palace of the Kings in Windhelm and talk to Galmar Stone-Fist and request to join the Stormcloaks, at which point Galmar will give you an initial test, as detailed at Joining the Stormcloaks.

You can join the Imperial Legion and fight against the Stormcloaks instead. Completing the Joining the Legion quest will cause you to automatically fail the Joining the Stormcloaks quest. However, the next quest for both sides is to find the Jagged Crown (Imperial or Stormcloaks). If you choose to bring it to the other party instead, you can still join them.

Three achievements (50 points; 2 Bronze and 1 Silver) are unlocked by completing either Civil War questline (either Stormcloaks or Imperial Legion). 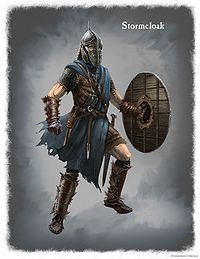 Concept art of a Stormcloak

Camps of Stormcloak soldiers can be found in each hold of Skyrim except for Eastmarch. These are marked on the map with the displayed bear pawprint icon. Stormcloak camps only exist in holds controlled by the Empire, and vice-versa, meaning these camps may not exist, depending on the player's chosen side and progress in the Civil War.