Making it to the Gates 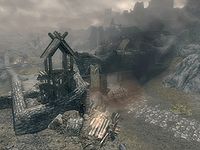 The Whiterun guard have stationed themselves atop the walls in order to defend the city...

After finishing the previous quest, Jarl Ulfric Stormcloak will tell you that you are going to help take Whiterun. Report to Galmar Stone-Fist for orders, who will direct you to meet him outside the city.

Head to the Whiterun Military Camp, southwest of Whiterun, and you will notice that the besieging of Whiterun has already begun. Head to where Galmar is briefing the men on the attack and listen in. He will say your destination is the drawbridge that has been raised to keep the attackers out.

Once the rallying of the troops is done, charge in with Galmar and the troops. Don't worry too much about killing all the Imperials, as more spawn. When you reach the first set of wooden barricades is also when you meet the first enemies. Breaking through the barricades is easy. Hit them a few times with a weapon and they break. Your journal will then tell you to lower the drawbridge. Move up the path to the small wooden bridge with the stone walls to your side, head up there, and go up the walkway. You will see two drawbridge levers over the drawbridge. Pull one. The bridge will fall, and the soldiers will run into the city. 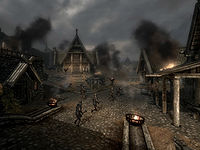 ...which is quickly overwhelmed by the Stormcloaks.

Head into the city. Your destination now is Dragonsreach (It may be safer to stay with Galmar and the soldiers). Several barriers block the entrance to the plains district, which are destroyed after 3 blows from any weapon (power attacks make no difference). Upon entering Dragonsreach, three soldiers will charge at you, but they will die easily. Continue up the stairs, where Balgruuf will shout about not letting you take the city without fighting back. Then he, three guards, and his Housecarl, Irileth, will attack you. Kill the soldiers. After the jarl is reduced to 25% health, he will stop the fight and surrender.

Vignar Gray-Mane will approach the jarl and they will have a short conversation. Galmar will stop the conversation after a while, Vignar will walk off after a few more words and Balgruuf will address you for a minute. With Balgruuf stepping down, Vignar takes the throne as the new Jarl of Whiterun. The quest will end there and the next quest, Liberation of Skyrim, will begin.

When you return to Ulfric Stormcloak in Windhelm, he commends you for the victory and rewards you with an enchanted leveled weapon and gives you the title "Ice-Veins".

Only the quest stages and objectives that are possibly relevant to this radiant version of the quest are shown.