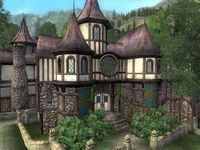 Cheydinhal Mages Guild is on the west side of town, next to the Fighters Guild Hall. 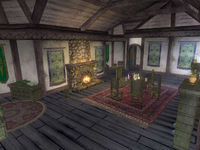 The main entrance of the Guild Hall reveals a respawning counter directly in front of the door which contains apparatus. Falcar, Trayvond the Redguard, and Uurwen can often be found in this room. Two sets of stairs are on each side of this room, the first on each side leading down and the farthest leading up.

The first room on the left, down the small set of stairs, leads to a small room where Deetsan can often be found. On the long counter against the wall sit four empty soul gems – two lesser and two petty – as well as an alembic and two calcinators. On the smaller glass counter are two alembics and two retorts, and it may also hold apparatus. Both containers in this room respawn.

From the main entrance room, the other small set of stairs leading down leads to a small room with a barrel, sack, chest, and bookshelf. They all contain only clutter, and the barrel may contain a repair hammer. The sack does not respawn; however, every other container in this room does.

The stairs leading up on the east side of the main entrance room reveal three barrels in front of the head of the stairs. They all contain clutter and possibly a repair hammer. The first cupboard, on the left, contains food. There are two additional cupboards next to the dinner table, one with drinks and one with dishes. On top of the latter sits two silver bowls with three samples of steel-blue entoloma cap in one and two cheese wedges in the other. On the floor near the dinner table is a watermelon. All of the containers in this room respawn. Along the east wall is another set of stairs leading up.

The top floor is one open room, living quarters for Mages Guild members. To the right of the entrance, two respawning barrels hold clutter and possibly a repair hammer.

In the alcove to the left, in the southeast corner of the room, a bed is available for any Mages Guild member. The weapons and armor chest next to it does not respawn, making it safe for long-term storage. On the bookshelf at the foot of this bed sits a silver dagger.

The table in the middle of the room holds three potions – a Potion of Fire Shield, a Weak Potion of Luck, and a Potion of Intelligence – and three bottles of wine – two Surilie Brothers Vintage 399 and one Tamika Vintage 415. The respawning chest of drawers behind the table contains clothing.

The alcove in the southwest of the room contains another bed for any Mages Guild member and a non-respawning chest which contains gold and/or jewelry and clutter. The bookshelf at the foot of this bed contains three notable book - The Seed, Azura and the Box and Mystery of Talara, v 5.

The alcove in the north of the room holds another bed available for Mages Guild members, with a respawning clutter chest at the foot. The respawning chest of drawers beside this bed contains only clutter.

In the small alcove on the east side of the room, a respawning desk contains only a common book and/or clutter. Orintur can often be found here. 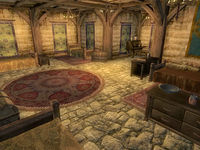 At the foot of the stairs entering the basement is a clutter chest and on the wall opposite the stairs, a non-respawning clutter sack and a respawning barrel with more clutter and possibly a repair hammer. On the bookshelf here is a copy of the Mysticism skill book The Firsthold Revolt.

In the large main room, there are two sacks and a barrel against the southern pillar. The table in the south corner holds five weak potions – three Fortify Magickas and two Fortify Intelligences - with a sack on the floor next to it. There is a single barrel on the south wall, and two sacks in the southeast corner. The untied sack may hold food. Another barrel sits against the north pillar, and two more next to the door on the northeast wall. Another sack is next to this door. The barrels in this room hold clutter and/or a repair hammer, and respawn. The sacks (except the untied one) hold clutter, and do not respawn.

In the north end of the room is a respawning desk which contains a common book and/or clutter, another bed, and a table next to it, upon which sits three sweetrolls.

Through the door on the northwest wall of the large main room, Falcar's double bed is to the left, which can be used by any Mages Guild member. The cupboard and chest here contain clutter. The chest of drawers here contains two black soul gems, and may contain clutter.

On the other end of the room, the chest of drawers contains clothing, and the shelf and drawers contains clutter, as does the desk, which can also contain a common book. On the shelf and drawers are two scrolls – one Absorb Health and one Major Heal Other. On the desk is a single feather potion. The chest of drawers with the black soul gems does not respawn; however, every other container in this room does.

The entrance is through the well that can be found in Cheydinhal, in the small grassy area behind the Mages Guild and Mach-Na's Books. The alcove to the south contains a Nirnroot, and the alcove to the west contains Vidkun's body.