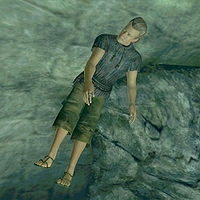 Vidkun was an unfortunate young Nord mage who was sent on a fool's errand by Falcar of the Cheydinhal Mages Guild Hall. You will learn of his fate when you are sent to perform the same task during the Cheydinhal Recommendation quest, although a strange rumor heard around the guild hall might give you an indication as to what happened: "Have you noticed a change in the well water recently? It tastes strange to me."

You will find Vidkun in the well, where he apparently drowned in his attempt to retrieve the heavy Ring of Burden. You will find it on his body along with a few gold coins and his outfit of sack cloth pants, sandals and shirt.

In the guild, Deetsan will provide you with some information on his departure: "He was an Associate, just like yourself. Perhaps not the brightest, but very eager. He was given his assignment from Falcar, and disappeared. It's like he dropped out of existence! No one knows what happened, and Falcar won't say a word about it." Uurwen will also take note of Vidkun's absence: "The last Associate that came in for training never came back. I guess Falcar really upset him. Deetsan seemed mad about it, too." Trayvond will say: "Falcar always has been pretty harsh, even when it comes to basic lessons. He seems to have gotten worse lately, though. I think he even scared the last Associate who came here for training. What was his name again? Hmm, I can't remember, Deetsan would know, though."

When you tell Deetsan the sad news, she will reply: "It's such a shame. He didn't deserve to die like that." When you break the news to Uurwen, she will say: "What a way to go. Awful news, just awful." Even Eilonwy has heard the tragic tale: "I heard what happened to him. I wonder if the Mages Council will do anything?" The guild obviously keeps things quiet though, as the residents of Cheydinhal will only say "I haven't seen Vidkun around town lately. I guess they're keeping him pretty busy at the Mages Guild.". Though apparently news made it to the other Guilds, as you may hear it from Teekeeus of Chorrol: "I can't believe a Mages Guild associate was found dead in Cheydinhal. What kind of place are they running there?"