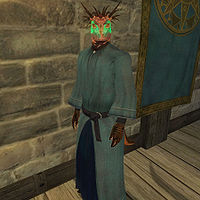 Teekeeus, head of the Chorrol Chapter

Teekeeus, an Argonian sorcerer, is a Wizard of the Mages Guild and the head of the Chorrol Guild Hall. He is a bitter rival of Earana; to the point that they managed to both get expelled from the Arcane University. During the Recommendation quest, he will at first ask you to investigate in regards to her permanence in town and then to retrieve the same book that she seeks, in a bid to 'win' the 'competition' between them. He is so anxious to beat her to it that if you give the book to her, he will even ask you to steal it.

He seems to have little to do in his life, apart from his feud with Earana. He will spend all of his morning, from when he wakes up at 8am, practicing casting a Summon Scamp spell in front of the reception desk on the ground floor. He will stop at midday, when he will eat a two-hour lunch in one of the chairs near the front door. He will then spend most of his afternoon wandering around the guild building. Between 6pm and 8pm, when all his fellow guildmembers enter the library to have their dinner, Teekeeus eats on the ground floor, once again seated near the exit. He will spend the last hours of his day strolling around the guild building, before going to bed at 11pm. The only change to this schedule is during the related quest. When you have given him the book he craves, he will immediately rush to store it inside the chest in his room.

He wears the standard mage's robe and a pair of gold trimmed shoes. He also carries a Mages Guild key, his own key and a sizable amount of gold. He doesn't wield any weapons, relying instead on two Conjuration spells (a practice Summon Scamp one and a leveled Summon Daedra one) as well as a set of leveled spells from all of the magical schools but Mysticism.

He owns his bed and the door to his room, which is why it is the only area in the Guild Hall where you will be trespassing. Although there is a chest in the room, which he also uses, he is not the owner.

If you wish to join the Mages Guild, Chorrol guild members will refer you to Teekeeus "You'll want to talk to Teekeeus, if you're interested in joining the guild. Any other leader of a local guild hall can help you as well." or various other responses depending on who you approach. When you first meet Teekeeus willing to join the Mages Guild he will say: "Greetings, citizen. Is there something I can do for you? Are you perhaps interested in joining the Mages Guild?" On the subject of Chorrol he will advise you to join: "If you're thinking of making Chorrol your home, you should join a guild. It's hard work, but steady money. And people get to know you. When asked about the guild, he will reveal his opinion on necromancy: "We're all better off now that Necromancy has been banned from the guild. It's just safer that way." If you want to join the guild he will respond: "Well, then. It's no small matter; membership in the guild is quite an honor, but also a responsibility. Do you wish to join the guild?" If you decline he will be disappointed: "No? Very well. Should you change your mind, you know where to find me." If you decide to join he will grant you access to the guild hall facilities: "Very well. You are now an Associate of the Mages Guild. The full guild hall is now available for your use. You'll need a recommendation from each local guild hall in order to advance further. Until then, the Arcane University will be closed to you. Welcome to the guild, and good luck to you." When asked, he will give you a bit of insight on the University: "The Arcane University is the seat of the Mages Guild in Cyrodiil. Located in the Imperial City, it houses the leaders of our guild." Also, he will compliment you if you have joined any guild in Chorrol: "It's good that you've joined one of our local organizations. It helps you make the right connections."

When you are ready to obtain his recommendation he will inform you: "I'm afraid I can't just write one out of hand. That would be against protocols, you see. If perhaps you can clear up a small matter involving Earana, you can prove your loyalty to the guild and earn my recommendation." If you inquire about her, he will mention their history: "She and I have an unpleasant history. She does not care for Guild regulations, and errantly believes I am mis-using my powers. I have seen that she is in town. Though she has not approached me, I know she wants something. I would like you to find out what it is. Determine what she's after, and how we may be rid of her. I do not want her here, spreading her lies." Once you have been to Earana and learned of her plot to get the Finger of the Mountain book Teekeeus will exclaim: "What? Not only does it exist, but she knows where it is? Well, this is unacceptable. That book needs to be in the safe-keeping of the Guild. I trust that as a member of the Guild, you would do the right thing and acquire this text before Earana does. Are we clear? Ignore her request, go to this place she has described, and return with the book. This is far more important than any petty squabble." If you seek further information on the book he will advise: "Should you go looking for it, I hope that it would be for the sole purpose of bringing it here."

If you give Earana the book Teekeeus will be worried: "Is the book safe? Do you have it?" When you inform him of your betrayal he will be furious: "What? This is unacceptable! At no time did I ever suggest that you should actually follow through and give her the book! It cannot be left in her hands! You will retrieve the book immediately, if you have any intention of ever receiving a recommendation from me!" If you return to him without the book he will be unamused: "Is this an attempt at humor? If so, I am not amused. Produce that book immediately." "I suggest you deliver that book as soon as possible. Your recommendation depends on it." If you steal the book and give it to Teekeeus he will be satisfied: "Finally. I shall see to it that the book is kept safe until the Council decides what should be done with it. I shall also overlook your... transgression, and send a recommendation to the Arcane University."

On the other hand if you hand the book straight over to Teekeeus he will be pleased: "My trust in you was well placed, it seems. Hand it over if you please." If you deny having the book it will arouse suspicion: "No? Are you quite sure? I would hate to think that you do, in fact, have the book, and simply have no intention of turning it over. Very well. Should you happen to find it, it would be in the best interest of all for it to be secure here within the guild hall." If you hand over the book he will respond: "Ah, yes. This is indeed the correct book. You've not been able to open it, I presume? Then all is well. You have shown yourself worthy of the guild, and for that I thank you. You shall have the recommendation you need. Now I must ensure this book is kept safe. Excuse me." He will then proceed to hide it in his drawers. If questioned about Earana he will be delighted: "She was unable to acquire the book, and that shall be enough for me. It would be beneath me to continue this petty squabble." When pursued about the book he will inform you: "I have the book stored safely for now; I shall hold on to it until the Council decides what should be done with it." If you should steal back the book and hand it over to Earana, Teekeeus will express concern: "Curious that you should inquire about it, as it has recently gone missing. You wouldn't happen to know anything about that, would you?"

Once you have obtained all recommendations, if you speak to Teekeeus on the subject he will say: "All of your recommendations have been approved, have they not? Then everything appears to be in order. Report to the Arcane University, and speak with Raminus Polus. He will provide further instructions for you."

While obtaining Teekeeus' recommendation Athragar will comment on Earana: "I don't know all the details, but I heard that she complained to the Council until they removed Teekeeus from his position at the Arcane University." Alberic Litte will inform you of her past: "She's been nothing but trouble. She went to the University long ago, but was expelled from the guild. Caused all kinds of trouble while she was there. I think Teekeeus was the one who finally blew the whistle on her. That'd be just like him too: always playing by the rules." Contumeliorus Florius will warn: "I'd steer clear of her if I were you. She has it in for Teekeeus, and wouldn't hesitate to bring any of us down with him." If you chose to give Teekeeus the book, you may hear these rumors: "The Chorrol guild hall had an unpleasant visit recently, from someone who had a grudge against Teekeeus." or "I hear a new Associate came to Teekeeus's aid recently. Something about an old enemy of his storming into town." Earana has her own thoughts on Teekeeus: "I'd have a few choice words for him, but he won't let me get near him. I know exactly why he's so threatened by me. He's desperately trying to control as much power as he can, and I'm a threat, because I don't want to see that power all in his hands. Anyone capable of handling it should have access to that power, don't you think?"