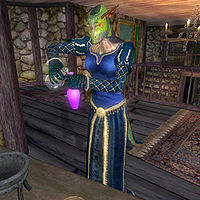 Deetsan in the Cheydinhal Guild Hall

Deetsan, an Argonian mage, is a Magician of the Mages Guild who offers basic Alteration training at the Cheydinhal Guild Hall. During the Recommendation quest, she will help you in your task by teaching you a simple Water Breathing spell for free. After the related quest, she replaces Falcar as head of the Cheydinhal chapter.

She is very much the scholarly mage and spends a good part of her day studying magic. After waking up at 8am, she will stroll around the guild hall for four hours before heading to the west wing and working on her alchemy skills by mixing up potions with the alchemy apparatus she finds nearby. Between 8am and 8pm, she will occasionally break off to cast a Light spell to improve her Illusion skill. At 8pm she will eat supper in the dining area in the east wing for two hours and will then spend the next four hours stuck into place, due to a bug. At 2am she should go to sleep but doesn't, due to another bug; instead she will wander around aimlessly. She will offer her services when not eating or sleeping.

She wears upper-class attire consisting of a blue velvet outfit and a pair of blue suede shoes. She also carries a sizable amount of gold and a bread loaf, which she consumes during her meals. She doesn't wield any weapons, relying instead on a set of leveled spells from all of the magical schools.

When you meet her for the first time, she will introduce herself briefly: "I'm Deetsan. Magician. Mages Guild, that is." She appears to be somewhat diffident. When asked about Cheydinhal she will say: "It's alright, the Guild here, that is. That's what you meant, right? It's fine. I'm doing fine here." This extends to her view of her posting in the town: "Our hall doesn't offer much in the way of training; I can offer some basic Alteration skills, but that's about it."

After receiving your task from Falcar, he will instruct you to obtain a copy of the well key from Deetsan. Talking to Deetsan will result in the following unsettling answer: "Don't tell me Falcar's given you the same task he gave Vidkun! Oh, dear. I'd say more, but... well, Falcar is the ranking member here, and I don't feel comfortable talking about him. I'm sorry. I'll tell you what. Find me when Falcar's not around, and then we'll talk. After we've spoken, you can have the key. Believe me, this is important." Attempting to ask her further while Falcar is present will yield this response: "As I've said, I just don't feel comfortable talking to you about Falcar. Forgive me." When approached later on, with Falcar out of sight, Deetsan will tell you: "We can talk, so long as Falcar is out of earshot. If I didn't know any better, I'd say he's trying to get you killed! He gave poor Vidkun the same task, and we never saw him again. I'm reasonably sure there's a connection, but I can't prove it. Do be careful. I'd hate to lose another useful Associate. Here's the key, and something extra. I don't know if it will be of use to you, but from what I've heard of Falcar's ring, it may come in handy. And if you find out anything about what happened to Vidkun, let me know, will you?" She will then teach you the apprentice level spell Buoyancy. If you pursue her further about the recommendation she will say: "Just perform the task you've been given. We'll talk more once your done." When asked about Vidkun she will reply: "He was an Associate, just like yourself. Perhaps not the brightest, but very eager. He was given his assignment from Falcar, and disappeared. It's like he dropped out of existence! No one knows what happened, and Falcar won't say a word about it."

When you have discovered the lifeless body of Vidkun and claimed the ring, Falcar will be gone from the guildhall. Deetsan, however, will fill you in: "I'm afraid some things have happened while you've been gone, Associate. It may affect your recommendation." If you speak to her first about Vidkun she will exclaim: "He's dead? Oh, I knew it. I just knew something like this had happened! Falcar must have known, and yet he said nothing. How could he allow this to happen? Thank you for letting me know, I'm sorry that you had to be a part of all this." When you proceed to talk about the recommendation she will be emotional: "I'll admit, it's my doing. I couldn't leave well enough alone, and after you'd left to go after that ring, well... I'm just so tired of the way we've all been treated by Falcar! I was worried about you, and angry about Vidkun, so I confronted Falcar directly. He was furious when I told him I'd helped you, and then when I threatened to report him to the Council of Mages, I thought he was going to kill me! He flew into a rage! I didn't even understand some of his ranting, but he said that our days are numbered, and then he stormed out! I don't know if he ever wrote your recommendation. I'm sorry. I didn't expect this to happen. Perhaps you should go look and see if he did write one? You should check his room in the living quarters. If you see the note, or anything else unusual, let me know. I'll gladly send it to the Council." If you ask her about the ring she will exclaim: "Oh, just drop it anywhere. I don't think he really cared about it. I think it was some sort of sick joke on his part." When she hears about Vidkun she will be upset: "It's such a shame. He didn't deserve to die like that." After you have found Black Soul Gems in Falcar’s quarters, Deetsan will be alarmed: "What's this? Black soul gems? Oh, dear. This is worse than I'd expected. All right. I'll just take these from you. I'll need them for my report to the Council. Now, you didn't find any sort of recommendation? Very well. I shall write one myself, and include it in my report to the Council. In light of the circumstances, I believe they'll find it more than adequate." If you speak with Deetsan after you have collected all recommendations she will say: "You've been through quite a bit haven't you? Well, I think you have proven yourself worthy. The Arcane University awaits you now. Speak with Raminus Polus when you arrive. He will assist you."

The townsfolk of Cheydinhal will often discuss Deetsan and her dedication to the Guild, although mistakenly referring to her as being male (see bugs):

After the Recommendation quest and Falcar's flight, they will comment on her promotion: "Did you hear Falcar left the guild? I think Deetsan is in charge in Cheydinhal now."