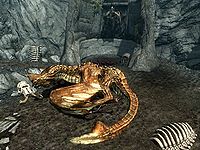 The word wall at Dragontooth Crater

Dragontooth Crater is a dragon lair located due north of Karthwasten.

Before the dragons' return, the place is occupied by Forsworn lead by a hagraven. There are three tents with two hay piles for sleeping, an arcane enchanter in front of the wall, a campfire in the middle of the camp, and a gruesome table with the remains of two people spread upon it between the fire and the enchanter. Around the camp there are up to four leveled Forsworn standing on lookout, warming themselves by the fire or sleeping, and a hagraven can be seen using the arcane enchanter in front of the wall. On the enchanter is a random soul gem, under it is a Forsworn headdress, behind it is a dead hunter, and the boss chest is against the wall. In the tower to the north there is a dead bandit, and on the table under the shrine there are two potions, a human heart, and a random dagger, all on the first floor. Also found is a leveled locked chest on the second floor and a random magicka potion on the top floor.

Once the Dragons Return

After completing the Dragon Rising quest, along the path in front of the tower can be found a charred corpse and the corpse of an Imperial soldier. A dragon lies in front of the wall near some bloodstains, instead of resting upon it like most dragons. The wall still has a Forsworn shrine attached on it, and the boss chest still sits just inside the semicircle of the wall.