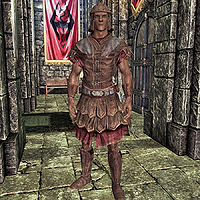 This particular soldier is the one who kills Lokir during his futile attempt to avoid the headsman's axe during Unbound.

Imperial soldiers wear a full set of Imperial armor, and may carry an Imperial Sword or Bow. They may also randomly carry any Amulet of the Divines except Talos.

You may come across a Stormcloak prisoner transport, where you may choose to free the prisoner. Choosing to free them will immediately cause the Legionnaires to become hostile.