A Double Agent Is You

When Ajum-Kajin dies at Modryn Oreyn's house in Chorrol, Modryn tells you the next step is to infiltrate the Blackwood Company and its ranks so you can investigate the answer to the final question and discover the secret of their strength. 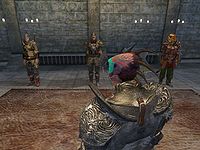 Travel to the Blackwood Company Hall in Leyawiin and speak to Jeetum-Ze about joining the Blackwood Company. He will be suspicious at first as he has heard of your exploits with the Fighters Guild, but he shrugs it off, remembering that several guild members have defected to the company recently, such as Maglir. Follow him to the Training Room to get your first mission. He will give you a special potion called Hist Sap and will begin to explain its origin. He explains that the Hist came from his homeland. However, when asked the question "You smuggle hist sap?", he reveals that the Blackwood Company has supposedly brought a hist tree into Cyrodiil. He will then instruct you to "drink up and get going", so drink the sap and you will receive a journal update saying that you feel a strange effect coming over you. After this, you will be transported to Water's Edge.

You may notice that the "goblins" don't really behave like they should. For example, they will not attack you. If you start to suspect what is really going on, you don't have to "clean out" the houses. If you go far enough from the settlement, you will be relocated to where Modryn is and may continue as described below (in the construction set this option is labeled "ran away like a punk").

After you have killed all of the "goblins" or have fled the scene, you will be transported to Modryn Oreyn's house. Speak to Modryn and he will tell you that his men found you unconscious in the streets of Leyawiin. Upon hearing your story he will be deeply concerned and will tell you to go back to Water's Edge to find out what really happened.

Return to Water's Edge, which is along the road north of Leyawiin. You will find the town scattered with bodies, namely those of: Biene Amelion; Marie Alouette; Eduard Retiene and Jolie Retiene. It seems that under the influence of the Hist Sap, you and the other members took them for goblins and killed them. Find and speak to Marcel Amelion, the sole survivor. He mourns the death of his daughter Biene, who was part of an earlier Fighters Guild quest, Amelion's Debt.

Return to Modryn Oreyn's house in Chorrol and speak to him to complete the quest. He assures you that the slaughter at Water's Edge was not your fault, and proceeds to explain the next step.