Once again, speak with Modryn Oreyn at his house in Chorrol. The Blackwood Company has spun entirely out of control and the last move must be made to stop their chaotic vigilantism. Modryn says you must go back to the Blackwood Company Hall in Leyawiin, find Ri'Zakar and the source and show them the true meaning of justice. You must be careful, however, for Blackwood now knows your position and given the last turn of events, there's no telling what sort of greeting they might have waiting.

Head on up to find Ri'Zakar seemingly in wait for you. Let him speak his short piece or cut him off quite literally in mid-sentence. Once you have broken the Blackwood chain of command, search Ri'Zakar's body to find the Blackwood Co. Basement Key. The basement door is on the first floor near the steps, so head on down there and make your way into the basement.

We Don't Need No Stinking Water

The room is a mechanized monster, with the Hist Tree in the middle connected to multiple pumping machines and run by a rotted screaming furnace. Two more Argonian members (Sings-Like-Thunder and Hears-Voices-In-The-Air) are down here tending to the beast, so finally end Blackwood's regime and leave them cold. Once they are out of the way, you must find a method to stop the infernal machine from pumping its bloodlust elixir, and put the poor tree out of its misery.

To stop the machine, pick up the two Loose Pipes that are lying on or near the table by the furnace. Once they are in your inventory, activate one and then the other Sap Pump on each side of the tree. This should destroy both of them and you will get a message saying the tree has been destroyed.

Exit the basement only to be surprised by your old friend Maglir, who is quite upset at you. He will rant about how you "ruined everything" and then attack. Once you have defeated him, make the long journey back to Chorrol and visit Modryn Oreyn again.

Modryn is beyond pleased at your news and says he plans to retire and work on some hobbies. He gives you the Helm of Oreyn Bearclaw as a reward, which boasts a fortify Agility and Endurance of 10 points and can take a ridiculous beating before needing to be repaired. Modryn also suggests you speak with Vilena Donton about what has happened. Head over to the Fighters Guild and find Vilena, who isn't very happy to see you as she's still fuming over your involvement in Viranus's death. She is most displeased that you have taken it upon yourself in plotting with the expelled Modryn Oreyn against Blackwood, so she strips you of your Champion rank. However, words cannot express how happy she is at the fall of Blackwood and the courage you displayed in taking them on. Therefore she promotes you to Master of the Fighters Guild and suggests you name Modryn as your second-in-command. Head back to Modryn's house and ask him for his services. Although he has become nothing shy of a savant painter in this short time, he will happily agree like only Modryn knows how.

Master of the Guild

At this point, the Fighters Guild quest line is officially finished. However, as the master of the guild, you get to determine the guild's overall priorities. Your choice will affect the reward that gets placed in the "Guildmaster's Chest" (on the top floor of the Chorrol guildhall) every month. At any point you can talk to Modryn to change the guild's current priorities. Your choice will remain in effect until you tell Modryn otherwise. The choices are:

The standard monthly gold is a randomly determined amount from 0 to 990 gold; it is not influenced by your character's level. The random loot is generated from a special leveled list. An item has equal chances of being any one of the following seven types of items: an enchanted bow; enchanted armor; an enchanted blade weapon; an enchanted blunt weapon; enchanted arrows; enchanted jewelry or potions. Within each category, the specific item is randomly determined using the same leveled lists used to place loot in dungeons or equip NPCs. See Generic Magic Weapons and Generic Magic Apparel for more details on what types of items are included. 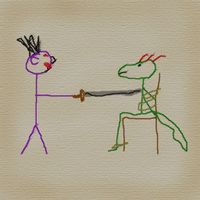