Note: This quest can only be started after gaining full access to the Throat of the World during the quest of the same name. 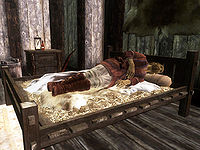 If you have already met Paarthurnax during the quest The Throat of the World, a few days after the failed attempt to help Windhelm alchemist, Nurelion, realize his life's ambition, a courier will seek you out with a letter from Quintus Navale who is determined to save his master's life. Head to Windhelm and locate The White Phial in the market district. In there, Nurelion will still be in his bed, coughing and slowly dying. Quintus, however, will be more than ready to explain what is needed to repair the Phial: "I have some thoughts. There are three crucial elements. Some may be easier to find than others. On the top of the Throat of the World is a patch of Unmelting Snow. No heat can touch it. Then we need the tusk of a mammoth, ground to a fine powder as only the giants know how. The final step is tricky. It requires the briar heart from a Forsworn of the Reach. If you can bring me these materials, the Phial can again be made whole."

Although he claims not to be as skilled as his master, Quintus will provide quite a bit of information on each of the items, merely to explain his plan and why they are needed to repair the Phial: 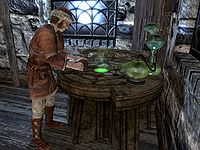 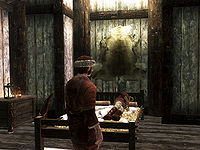 The rather unremarkable patch of Unmelting Snow can be found at the Throat of The World. Mammoth Tusk Powder is in a large vat beside the giants at Stonehill Bluff, and it is possible to pick up the powder without aggravating the giants. Note that the Mammoth Tusk Powder is different from the alchemy ingredient Powdered Mammoth Tusk. A Briar Heart can be acquired from a dead Forsworn Briarheart and can be obtained from multiple Forsworn camps; one will be marked on your map.

When you return to Quintus with the three items, he will be relieved: "Thank the gods. I'll get to work on the Phial straight away." He will then leave his spot behind the counter and get to work at the alchemy lab in the corner. Once he is finished repairing the Phial, he will head upstairs, eager to show his master what he has accomplished:

Quintus: "Master, look. It's the Phial."
Nurelion: "What? How?"
Quintus: "It doesn't matter. Look, it's refilling with your tonic as we speak."
Nurelion: "Marvelous."

Nurelion will then die peacefully and Quintus will turn around and express his gratitude: "He is gone. But thanks to you, he died knowing his life's work was not in vain." When you say you are sorry to hear that old Nurelion is dead, he will respond: "As am I. You acted very nobly in helping my master realize his life's work. Thank you for that. As for myself, I've always been content to simply be an alchemist. I fear keeping the Phial would just remind me of Nurelion's obsession, and how it consumed him. Here, keep it. You are as much a part of its legend now as Curalmil was. I hope it brings you the happiness that my master desired."

You have a number of options for which kind of liquid the Phial will be able to regenerate:

You will be given The White Phial, which functions as a potion of the nature you chose. Drinking it moves it to the Miscellaneous section of your items menu as The White Phial (Empty). It refills after 24 hours. Attempting to use the empty phial duplicates it, but only one phial will fill after the time has passed.