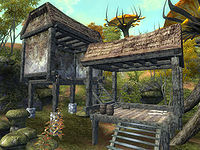 Longtooth Camp is a campsite north of The Fringe containing Heretics or Zealots (quest-related).

The campsite is found on an unmarked road and is inhabited by a group of Heretics who are constantly warring with Zealots from Hardscrabble Camp over a fork. Before the related quest, only one Heretic is present.

When the related quest is active, a Heretic boss and two followers will arrive to replace the previous Heretic. The rival Zealot group will attack the camp to steal the Fork. As the Zealots enjoy a numerical advantage, they are likely to kill all the Heretics. The Zealot boss will return to Hardscrabble to store the precious fork, but the surviving Zealots will stay put. Once the quest is over, the camp will revert back to normal and you will only find the one Heretic.

The camp itself consists of two platforms connected by a set of steps: the first platform contains two bedrolls and a minor loot chest with the book Bark and Sap placed on top of it. Continuing up another flight of stairs, the second platform consists of two bedrolls, a small shrine with the bust of Sheogorath (see Notes below), a jewelry box and the book Heretical Thoughts. On a nearby table are the book The Predecessors and the Fork of Horripilation.