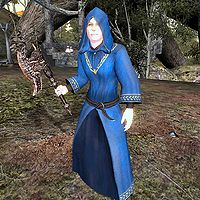 Heretics are those opposed to Sheogorath and wish to see him dethroned. Therefore, they are enemies of the law and must live in rural areas. Heretics make camp on the Mania side of the Isles, and like everything else in the Isles, they have an opposite of equal status to them: the Zealots of Dementia.

Heretics usually rely on Conjuration spells, similar to the Zealots of Dementia. They also use Destruction spells and some Restoration. They tend to use Blunt weapons rather than Blades.

It is possible for the player to disguise themself as a Heretic if wearing both their robes and hoods in order to deceive other Heretics. This works only at a distance, and if the player gets too close they will see through the disguise and attack.

All Heretics have a special Heretic Birthsign that provides them with the following permanent bonus:

They also have a Firm Beliefs lesser power:

In addition, all Heretics have a set of leveled Heretic Spells, including:

"Boss" Heretics have an identical spell set to regular Heretics with the exception of a higher-level Summon Hunger spell.