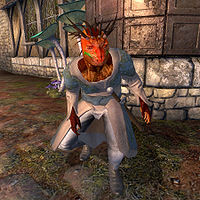 Big Head is an Argonian savant living in Bliss, New Sheoth. He is manically obsessed with forks of all shapes and sizes and goes fork hunting every day, hoping to retrieve yet another piece to add to his gigantic collection. During the related quest, you will have to track down his most precious collector’s item, the Fork of Horripilation.

His house is located in the alleyway east of The Missing Pauldron and is a regular fork temple with various forks in glass displays, cupboards and drawers, and a big Grummite statue holding a pitchfork. Big Head loves each and every fork, to such degree that he never even sleeps, but instead spends his nights wandering around the house, admiring and worshipping his collection. At 6am, he pauses to eat a two-hour breakfast on the ground floor. When the clock strikes 12pm, he finally leaves and heads to the Sacellum Arden-Sul, finds himself an empty pew and prays for two hours; although he will cut off his trip between Ritual of Accession and Retaking The Fringe quests.

He leaves the temple at 2pm and starts his daily fork hunt, always crouching in sneaking position, checking out if any Bliss citizens have forks in their inventories. If he finds a fork, he will carelessly attack the citizen in order to obtain it, never even thinking about the many Golden Saint Guards patrolling the streets. He finally gives up at 8pm, enters The Choosy Beggar and steals some food. This will typically alert the guards once again, but Big Head just ignores them and eats untroubled for the next two hours. At 10pm he returns to his house for yet another night in the company of his precious forks. 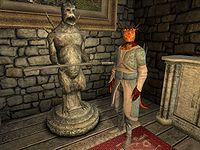 He wears a brown tunic, grey trousers and brown loafers. He also carries his house key and a small amount of gold. In combat, he relies on an iron shortsword and a set of leveled rogue spells.

His fellow townsfolk have noticed the overly manic Argonian and when asked about rumors they will tell you: "Poor Big Head will never find the Fork of Horripilation." and "That fool Big Head is always looking for the Fork of Horripilation." Others will observe: "I'm not sure it even exists. He'll never stop looking, though." and provide some interesting information about the fork: "I have heard Sheogorath has called it back to the Isles. Perhaps he will find it one day." to which others will add: "It's a myth. Deluded fool." Even outside New Sheoth, in the many villages and settlements, people will tell you that: "The Argonian Big Head is always searching for the Fork of Horripilation." Halion, a poet located in Hale will rhyme: "If you find a special Fork to Big Head you should go. He isn't the sharpest blade in the drawer; you have more smarts in your toe." The demented Atrabhi will lie about Big Head, saying: "The Argonian, Big Head, is always searching for the Spoon of Horripilation. Yeah, the Spoon of Horripilation. Certainly not a fork." On the subject of the fork, she will again lie, saying: "Sheogorath has sent it away. It's definitely not back in the Isles."

When you meet Big Head for the first time, he will not only reveal his lunacy by saying: "Sing for Big Head.", but will also tell you about his beloved, singing fork: "The Fork for Big Head. Oh, where has Master put the Fork? It sings alone. Far from home. Sad, sad Fork. Sad, sad Big-Head." When you ask him to elaborate on the fork, he will shout: "The Fork! The precious, precious fork! Hear how it sings to Big-Head! Beautiful, perfect Fork of Horripilation! But it is gone. Gone, gone, gone. No more singing. No more ringing. Taken from Big-Head, never returned. That is when Big-Head came here. Master brought me! Whispered shouts into my ear! Songs of Madgods! Songs of bad gods! Softly, Master. Softly." When you ask him how all this happened, he will give you a rather cryptic explanation: "It went away. But it will come back! It always comes back! It is close. Big-Head can hear it! The Fork of Horripilation! Hear it singing! Songs of home! It comes again. It brings presents! It is not present. Soon it will be! You will find it! Bring the Fork! Hear the music. Music of toads. Music of roads! Sing to yourself, so all can hear!" And he will tell you to locate Bolwing for more information: "Talk to the beggar! Talk to Bolwing! He knows secrets, but no one can hear them. No one but Big Head. Take Big Head's charm! Listen to Bolwing! His tongue is tied, but his mind is unraveled! He'll tell you the secret. Who has the Fork?" If asked about the fork again he will say: "Find the Fork! Bring it to Big-Head! Sing it to Big-Head!" When exiting conversation, he will bid you farewell: "Songs of forks follow you."

If you talk to him again an eager Big Head will ask: "The Fork! Songs of bringing? The Fork for Big-Head?" Without the fork in your inventory, he will be overly disappointed: "No Fork for me? Very sad Big-Head. Sadsadsadsad. Come back when it sings to you. Songs of returning." If you approach him with the fork in your inventory but decide not to hand it to him right away, he will say: "You have the Fork? I hear it singing so close? Songs of such closeness! Songs of almostness!" When you finally hand him the fork, he will be overwhelmed with joy and give you a reward: "You bring the Fork! Happy day! The blind shall see! The lame shall walk! The short shall tall! Forks for all! Big-Head names you friend! Songs of friendship! Songs of ship-friends! Presents for you! Presents on Hatching Day! Big-Head was hatched, but his brother was not! Presents for egg-friend! Almost forgot! Selfish Big-Head. Shellfish Big-Head! Big-Head knows secrets. Secrets of learning. Alchemy, Sneaking, and stabbing with Blades! Which will you learn?"

Blade - "Big Head knows a secret about blades. Point them out, never in. Blade is out - poke, poke, poke! Kill the grandpa netch!"
Sneak - "The secret to sneaking is not to be seen. Empty rooms. Empty tombs! Sneak in the dark, though the blind man can see you."
Alchemy - "'Poison' is 'potion' spelled differently. Both come in bottles, but one is good to drink! Singing potions! Ringing potions!"

After the quest he will happily greet you with: "Sing to Big Head. Sing to him." If you speak to him after completing the Main Quest and The Fork of Horripilation, a humble Big-Head will bid you farewell with the words: "Happy Big Head for having spoken to Lord Sheogorath!"

If Big Head is killed, a tombstone will appear in New Sheoth Graveyard reading: In memory of Big Head. Completely Forked..

At different stages in the Main Quest, Big Head will share different rumors with other NPCs: