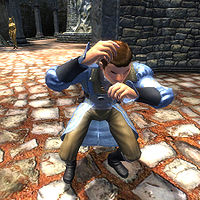 Amiable Fanriene is a Breton conjurer living in Bliss, New Sheoth. He is extremely paranoid and in constant fear that his house's walls will fall down and kill him. This paranoia makes him have much more in common with the residents of Crucible than those of his native Bliss. Once you meet Amiable, he will ask you to find him a place outdoors where he can sleep safely.

He lives a rather unremarkable life: he will spend most of the day constantly cowering in front of The Choosy Beggar, apparently locked into one of his paranoid fits. At 8pm, he finally decides to enter the inn and spends two hours eating there. Because of his fixation, he will always be found wandering around between midnight and 6am; either outside or, if he's feeling particularly brave (a 50% chance), in his own bedroom. After the related quest he will regain a bit more sanity: at midday and 8pm he enters the Choosy Beggar and stays there for two hours while trying to satisfy his hunger by either eating the food on his person or trying to snatch some. He will also go back to sleeping, and will do so between midnight and 6am in what used to be Uungor's old bedroll. At all other times he will continue his cowering.

He wears a vibrant light blue regalia. He also carries a sizable amount of gold, his house key and an upper-class foodstuff he consumes at meals.

If he has one of his clear moments and notices you, he will warn you: "Careful! Don't want to get squashed." When you approach him, he will fill in you on his big problem: "Hello... don't mind me... I'm a little tired. Can't sleep at home, you know. The walls. They aren't safe." And he will elaborate if you ask: "Don't you know? You don't, do you? Well, it's lucky you met me. Here you've been walking around as if nothing could happen!" When you suggest he could be sleeping outside, he will say: "Well, there's an idea! Why didn't I think of that? But, where would I sleep? I need someplace to sleep. I'm [sic] seen some people sleeping out on the street, but they huddle too close to the walls. I need someplace safe. I can't just sleep anywhere. There're [sic] walls and statues and all sorts of things that can fall on me. Can't have that. Nope. But... if you find me a good place to sleep, a safe place -- outside -- I'll reward you!" When exiting conversation he will offer a bit of advice: "Remember, walk lightly, and always look up." If you approach him before having talked to Uungor, he will impatiently ask: "Have you found me a safe place outside to sleep yet?" If the answer is negative, he will say: "Don't tease me. It's serious. I could die. We all could die! Please, help find a safe spot outside to sleep where the walls won't come crashing down." 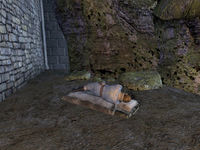 After Uungor has agreed to trade his bedroll for Amiable's bed, he will be overly excited: "You found a place for me to sleep? Outside under the stars too small to fall and hurt me? Excellent, excellent! Tell me more!" When you do so, he will reckon it is the perfect solution: "Really? And it's a safe place? Not at the bottom of a tall wall? That's a great idea! That sounds perfect. Well, I guess if he's not afraid of the walls falling on him, he won't care when they do. Can't save everyone, can we?" If you choose the violent approach and kill Uungor, he will be more happy than sad: "Oh so sad. I hope he didn't die in his bedroll. Can't have that. Because that's where I'll be sleeping! But it's not at the bottom of a tall wall. So that means I can sleep without waking up under a pile of rubble, or worse - waking up dead!" When you ask for your reward he will say: "Oh yes, my pardons. But what can I give you? Hmmm... Oh, here! Take this scroll. I was going to use it when the walls fell on me and I got trapped. But now I don't need it anymore!" Approaching him again will reveal that sleeping didn't cure his paranoia: "Hurry, before everything falls on top of us!"

His fellow townsfolk have noticed the overly paranoid Breton; when asked for rumors or during conversation they will say: "Amiable Fanriene thinks his house is going to fall in on him." and "That Amiable Fanriene is afraid of his own shadow.", while some others will respond: "I've heard he can't even sleep, he's so afraid." Even outside New Sheoth, in the many villages and settlements, people will say: "There's a man in Bliss who believes his own house will collapse around him.", to which others will concur: "That's Amiable Fanriene. He can barely sleep because of it." In Hale, creative poet Halion will recite a small poem about Amiable: "There is a man in Bliss who feels his doom comes soon. Some say he's wrong and other say he's right, but I say he's a loon."

At different stages in the Main Quest, Amiable will share different rumors with you and other NPCs: