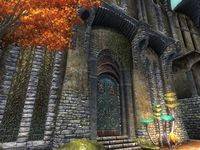 Amiable Fanriene's House is a house in western Bliss, next to Orinthal's house and Common Treasures and in front of The Missing Pauldron.

His house reflects his status as one of the richest citizens of New Sheoth. The ground floor is divided into two cathedral-like naves with large stained glass windows at each end. In the center is a storage room, to the right the dining room with a long table and a bust of Sheogorath while to the left you will find some more storage and the staircase leading to the second floor. The upper story is also structured like the ground one: the landing is used as a storage room and the right wing is the bedroom with a bed, a cupboard and a bookcase which holds a copy of The Madness of Pelagius, a Guide to New Sheoth and two copies of Zealotry. The left wing only holds two large busts of Sheogorath. All containers in the house hold the usual food and clutter except the cupboard in the bedroom which contains up to two pieces of Mania clothing and has a 2% chance of containing a museum oddity. 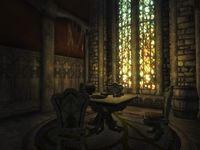 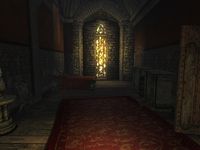