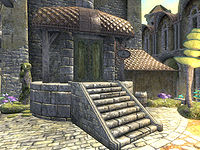 The Missing Pauldron is a blacksmith store in Bliss, the manic half of New Sheoth. It is adjacent to Books of Bliss and in front of Amiable Fanriene's house.

The proprietor, Dumag gro-Bonk, has 1200 gold and a Mercantile skill of 34. When bartering, he will buy and sell weapons, armor and miscellaneous items.

As part of the related quest, Dumag can forge amber armor or weapons for you provided you supply him with the necessary number of amber pieces. If you also have the appropriate amber matrix, he will be able to fashion magical amber weapons or armor.

The first floor actually contains two areas: the top level is very spacious and well-lit and contains a rather large forge, various smithing implements, a display of Dumag's wares and some storage containers. The main trading room is on the lower level and consists of a smaller forge, a lounge area and two sets of amber armor, along with a Amber materials list pinned to the wall.

The townsfolk of New Sheoth will divide along regional lines when commenting on Dumag's shop. Inhabitants of Crucible prefer Cutter:

"I'm not about to go to the Missing Pauldron, even if they do sell armor. I'll stay in Crucible, thank you."
"I don't trust that Dumag, so I don't shop there."

In Bliss and Hale, however, the general opinion is entirely different: