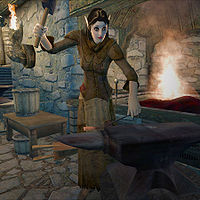 Cutter in her store 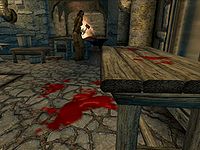 "I test the blades personally."

Cutter is a Bosmer smith living in Crucible, New Sheoth. She is the proprietor of Cutter's Weapons where she sells weapons and offers repair- and recharging services. Cutter is one of only two smiths in the Shivering Isles that can forge powerful magic and non-magic weapons and armor; her specialty is forging armor from madness ore and matrices.

Cutter wears patchwork pants a patchwork shirt and a pair of scruffy shoes. In combat she will either use her iron dagger or her iron bow. She carries a copy of the Liturgy of the Duelists confirming her identity as a member of the club. Besides that she carries a bottle of ale, a small amount of gold, her key and a Duelist's Key further associating her with the Duelists. Cutter knows the standard leveled Rogue spells.

Manically obsessed with bloodshed, including her own, and with blood on the floor of the main trading room to prove it, she opens up her shop every day at 8am. She spends the next twelve hours offering her various services to the occasional customer before locking up again at 8pm. At that time, she heads up onto the rooftop above Sickly Bernice's Taphouse where she meets up with the other members of the duelists, for two hours of fighting, drinking and bleeding. On Morndas, she will fight Ma'zaddha and Ushnar gro-Shadborgob. Turdas sees her fighting against Caldana Monrius and on Fredas, she will fight both Caldana, Ushnar and Muurine. When she isn't fighting she will be eating on the rooftop and cheering on the day's fighters. She always heads back to her house at 10pm and eats a late dinner until midnight. She was supposed to sleep between midnight and 8am but doesn't, due to a bug.

If you pay her smithy a visit during opening hours, Cutter will stop working and introduce herself and hand you the Madness Ore Materials List, thus starting the quest The Antipodean Hammer: "They call me Cutter. For a truly inspired blade, I can forge Madness Ore! Here. Hold onto this parchment. It lists what I need." Asking her about Madness Ore will make her explain: "Spirits of ancient souls are trapped in the Ore. Find it in old ruins. Also, Grummites are especially attracted to it. It's a supple and flexible ore. Yet it holds a good edge. I can shape the sharpest of blades from it. I can also create magical items." A new topic named ‘Magic Items’ will appear and when asked, Cutter will provide a good deal of background information: "Tradition dictates before each master smith dies, she hides these magical molds in the world. Like pouring salt into a wound. Over time they soak in magical energies from the world around them. Like you suck blood from a cut. Bring me a matrix and enough Ore, and I will forge you a new item and bleed the magic of the matrix into it." When asked about forging, she will request a certain amount of Ore: "I'd love to hammer Madness Armor to hold your shape. But you must provide some Madness Ore. Inspect the information I have posted." and "I'd love to shape a weapon for you, but you don't have enough Madness Ore. Have a look at the info I've posted in the shop." She will bid you farewell with one of these sensual statements: "Going so soon? Come back when your blades need sharpening.", "Go. Sink your blade deep into the flesh of your enemies.", "When your blade bites into your foe and he screams in pain, think of me." and "May you bleed well!" The next time you talk to her, she will greet you in different ways: "Something smooth and sharp? Leave your foes sticky with blood.", "I do delicate things with Madness Ore. It tingles across the flesh when it cuts." or "Do you long for a blade? To cut with? Yes?" 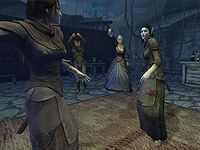 If you meet Cutter at other times than business hours, her dialogue will change slightly. During her evening sessions with the Duelists, she may say: "You are not a member of the society. Watch if you must, but don't get in the way." Also, if you break into her store between 10pm and 8am she will ask to be left alone: "Please leave! These are private moments!" and "Visit me during store hours. These are private moments."
When you use her various services, even more bloodthirsty comments will appear. When bartering she will utter: "I've got the sharpest blades in the Isles. Maybe anywhere. Take a look.", "Need something sharp? Stabbing, cutting, that sort of thing? I can accommodate you, I assure you." and "Weapons and armor here. Especially weapons. Sharp ones." After a trade she will add: "If you need more, you know where to find me. I'm nearly always at work." Using her repair services will net you: "I'm very good at sharpening blades, but I can do all sorts of repair work". and "I stand by all my repair work. I test the blades personally." If you have finished the Main Quest, Cutter will address you as Lord Sheogorath: "Lord! How may I serve You? Do You require a sharp blade to bleed your enemies?" She will exit conversation with: "My Lord has a real edge I'd like to cut myself on."

During the quest The Lady of Paranoia, Cutter will prove helpful in unveiling the conspiracy on Syl, even if she will hesitate at first: "I don't spread gossip. I have nothing to say." A bit of painful persuasion from Herdir will not even impress her: "You think I can't take that kind of pain? I've had worse. I won't tell you anything. There's nothing going on!" The second zap from Herdir will make her break down and talk: "Just stop it! Ma'zaddha and Nelrene... They meet in the street during the night. No one knows what they talk about. That's it. That's what you want, isn't it? Now leave me alone!"

Cutter's ‘special’ abilities with blades are well-known; all over the Isles, people will discuss the self-mutilating Smith from Crucible: 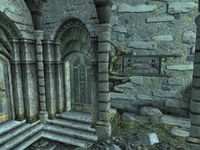 "Cutter sells weapons in Crucible, but you won't catch me going there."
"I'd buy my weapons at Cutter's. She has... a way with blades."
"To Cutter's in Crucible you should go for bladed weapons to thwart your foe."
"I hear Cutter collects the Madness Ore to turn into armor."
"I hear she makes armor and weapons out of it. For a price."
"She can make armor. And weapons. I've also heard she's found ways to make magical versions, as well."
"I try not to buy anything from the Demented, especially weapons."
"She has a gift for blades. No doubt about it."

Occasionally, Cutter may also greet you with "You remain faithful. That is good. I will cut your throat if you visit that other smith.", hinting that she has a rival in New Sheoth. That rival is the proprietor of The Missing Pauldron in Bliss, namely Dumag gro-Bonk, who can forge weapons and armor from Amber. An ongoing and unfriendly feud between the two smiths will be present at all times and they will both get angry if you have visited the other smith. As a result, Cutter’s disposition will lower and she may greet you with: "You have been unfaithful. His blades are dull and uninspired. Mine are sharp and exquisite.", "Do you enjoy it? Cutting my heart? Why visit that other smith?" and "Why visit that other smith? Piercing flesh with my blades doesn't satisfy you?" In Bliss, Dumag gro-Bonk will hatefully say: "I am the Master Smith of New Sheoth. Why bother with that other smith?" and "What can you possibly see in her? She spends more time cutting herself than swinging a hammer."'

Every time you hand Cutter the required amount of Madness Ore, she will forge a weapons or armor and comment on the item. The remarks will change if you hand her a Matrix and ask her to make a magical version of the item.

At different stages in the Main Quest, Cutter will share different rumors with you and other NPCs:

"Hello there! Can I cut you a deal?"
"Good to see you again. Do you need me to sharpen your blades?"
"Have you brought me some Madness Ore?"
"I have the sharpest blades. I test them out on myself before I put them on sale. They are deliciously keen."
"Would you like a blade to cut open your foes?"