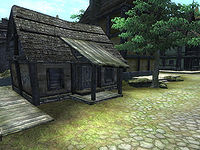 Weebam-Na's House is located near the pond in the eastern part of Leyawiin. The house is situated beside Dar Jee's house and across from the house for sale. It is the residence of Weebam-Na and his partner, Bejeen, and consists of only one zone, Weebam-Na's House.

The kitchen area in the southern half of the shack has a table set for two. On one of the plates is a meal consisting of a wedge of cheese, a potato and two radishes, while the other plate has a meal of two carrots and a loaf of bread. Two more potatoes sit in a bowl at the back of the table, with another lying next to the pitcher. On the shelving unit sits a pumpkin, two heads of lettuce, four potatoes and a watermelon. Three more watermelons sit on the table next to the shelves. The three barrels against the eastern wall serve as storage; the top barrel contains food while the bottom two hold clutter. In the northern half of the house two prominent areas can be identified; the sleeping quarters and a storage area with a table standing between the two. The three crates and locked chest in the storage space hold clutter while the two barrels contain food. A collared shirt sits atop the crate behind the slat divider and a pair of sack cloth sandals rest on the center table. The chest of drawers on the northern wall host more clutter and a shirt with suspenders atop the unit. Finally, the sleeping area holds more clothing; a pair of breeches and a pair of green felt linens sit atop the table while the braided leather sandals and the oiled linen shoes rest underneath. The locked chest the right of the table holds armor.